In our Solar Landmarks series, we explore solar designs for landmarks around the world—from Buckingham Palace to Independence Hall—all from the comfort of the Aurora office. In our latest installment, we took a look at one of the most fanciful sites yet: Neuschwanstein Castle.

Neuschwanstein Castle was built in the late 1880s and sits on rugged terrain near the German-Austrian border overlooking the town of Hohenschwangau. The famous castle attracts hundreds of thousands of visitors annually—and even served as inspiration for Walt Disney’s castle designs.

Although we wouldn’t expect to see solar added to this site anytime soon, given its historical significance, analyzing the solar potential of Neuschwanstein Castle presented a good challenge for Aurora’s design tools and irradiance engine.

Not only does this location provide a chance to utilize Aurora’s expanded international LIDAR data, but its mountainous location also provides a perfect venue to put Aurora’s new horizon shading functionality—which accounts for the shading impacts of surrounding terrain—to the test.

Let’s take a look at what we found in our remote site assessment for Neuschwanstein Castle. Could onsite solar be a good choice for meeting the castle’s energy needs?

To understand whether a solar installation was feasible for this site, we began by creating an accurate 3D model of the castle. A 3D model makes it possible to precisely determine shading at the project site, determine where it is possible to place solar panels (and ultimately how much energy could be produced if solar were installed).

Precisely modeling this complex site was made easier by the presence of robust LIDAR— a form of 3D data—at this location. LIDAR makes it easy to determine the heights and slopes of roofs, towers, and trees so that we can ensure our remote analysis is accurate.

Thanks to our partnership with Google, users can access LIDAR and crisp images worldwide. Learn more about this partnership and the coverage area here. 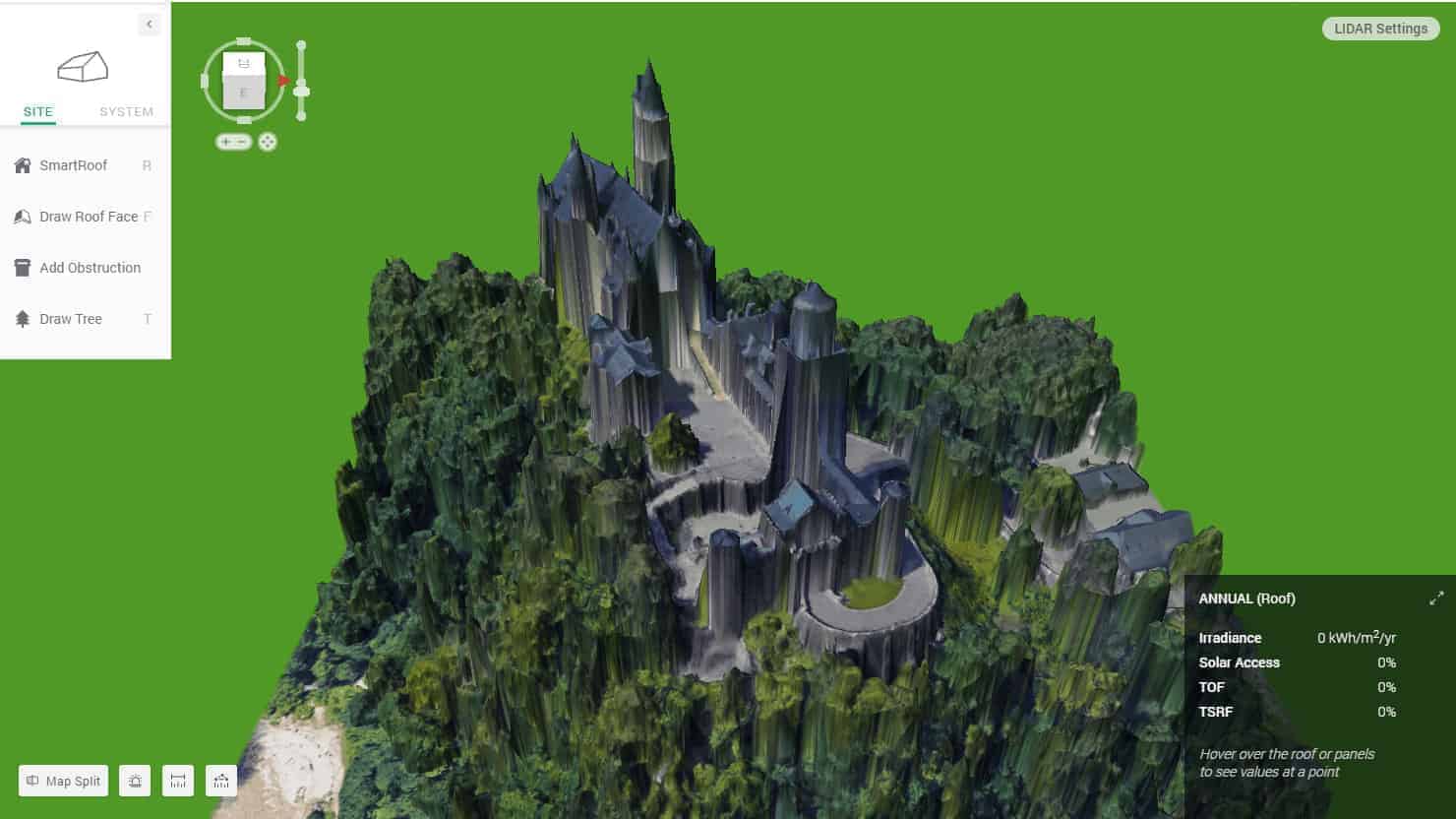 LIDAR data, available through a partnership with Google, provides a detailed view of the building, terrain, and trees at Neuschwanstein Castle. This allowed us to be confident in the accuracy of our site model and shading analysis, without physically visiting the site.

Modeling a complicated structure like Neuschwanstein Castle can be managed by combining several smaller roof sections, similar to how we modeled San Francisco City Hall.

We began by outlining the main rectangular sections of the roof using Aurora’s SmartRoof tool and then applied a steep pitch to the two sides. To ensure the pitch was correct, we used Aurora’s “Fit to LIDAR” option, to match the pitch of the roof faces to the actual conditions at the site.

The spires were modeled by creating a tall circular obstruction (again Fit to LIDAR helped to accurately model the height). From there, to create their conical roofs, we traced the perimeter to create the outline of the roof. If all the edge lengths are similar, the resulting structure will closely resemble a cone.

Adding dormers to the top of the castle was a breeze. We placed one using Aurora’s dormer tool, edited the edges, and then cloned it across the roof.

And there you have it—the completed castle: 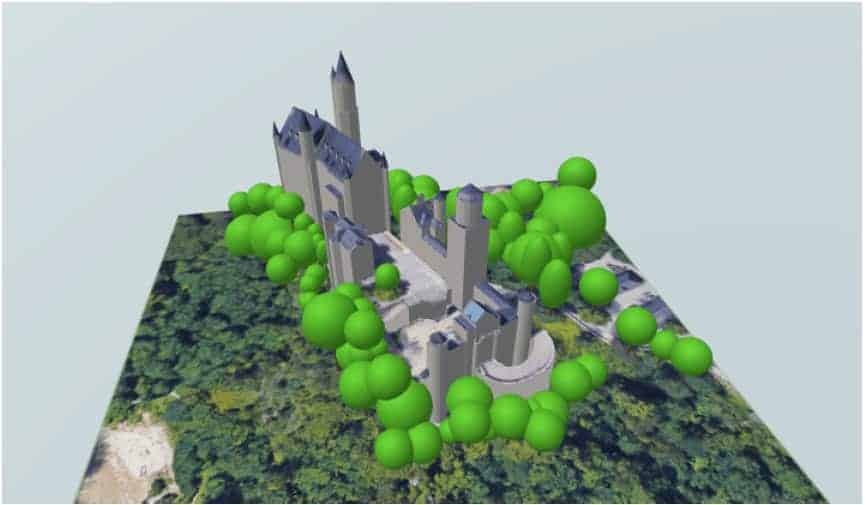 The next step of our remote site assessment to determine the feasibility of a solar for Neuschwanstein Castle was to calculate the irradiance at the site. With the design completed, we pressed the irradiance button to run an irradiance analysis of the site.

Aurora then calculated the irradiance on each roof face at the site, by simulating the position of the sun for every daylight hour of the year at this location, in addition to accounting for other factors like diffuse irradiance. 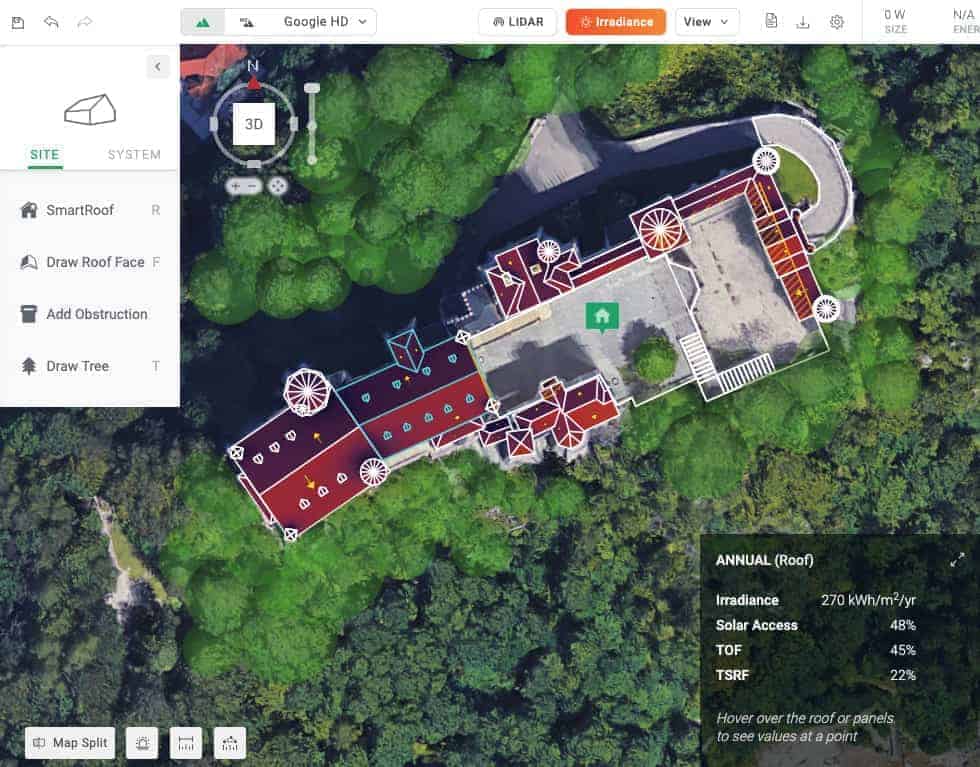 A color-coded irradiance map showing the irradiance on the roof faces of Neuschwanstein Castle, generated by Aurora. The values in the bottom right corner show the irradiance where the user’s cursor is on the roof; the values shown are for a less sunny area on the north face of the roof but Aurora users can mouse over their designs to see irradiance in different areas.

As you can see in the resulting, color-coded irradiance map, the solar access at this site is not optimal. Many of the lower roof surfaces are shaded by towers and parapets.

Additionally, the spires and many of the roof faces have such steep slopes that their available sunlight is quite low on the year because of poor tilt and orientation factor (TOF) values. (As we explain in this blog post, the tilt and orientation of a roof have a big impact on how much sunlight reaches the surface). 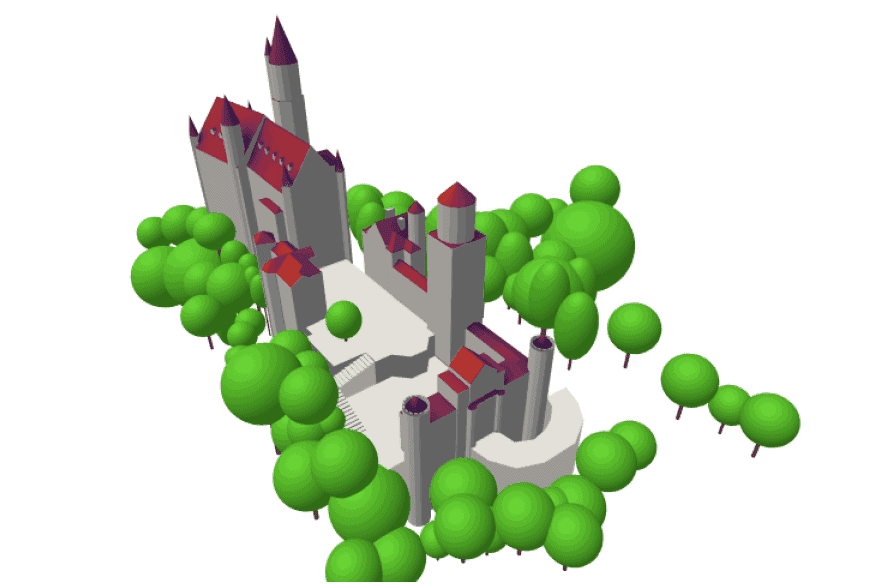 A 3D view of our model of Neuschwanstein Castle, showing the irradiance on the roof. The dark colors indicate lower irradiance that is not optimal for solar.

On the north face of the main roof, the solar access is as low as 45% in some areas; even on the more optimal south face, solar access varies widely due to shading from dormers and towers. In the sunniest locations on this roof face, the Total Solar Resource Fraction never exceeds 87%.

How Does Horizon Shading Impact This Roof?

In addition to poor TOF and shading from the castle’s many ornate architectural features, there’s another big factor at play in the poor irradiance levels we find at this site: horizon shading.

As we mentioned earlier, Neuschwanstein Castle is in the southern area of Germany, right up against the Bavarian Alps. The photo below shows some of the large peaks to the east and south of the castle. As you might guess, these have a noticeable impact on the sunlight this site receives at certain times of the day and year. With Aurora’s new horizon shading feature, we can determine exactly how that impacts irradiance. 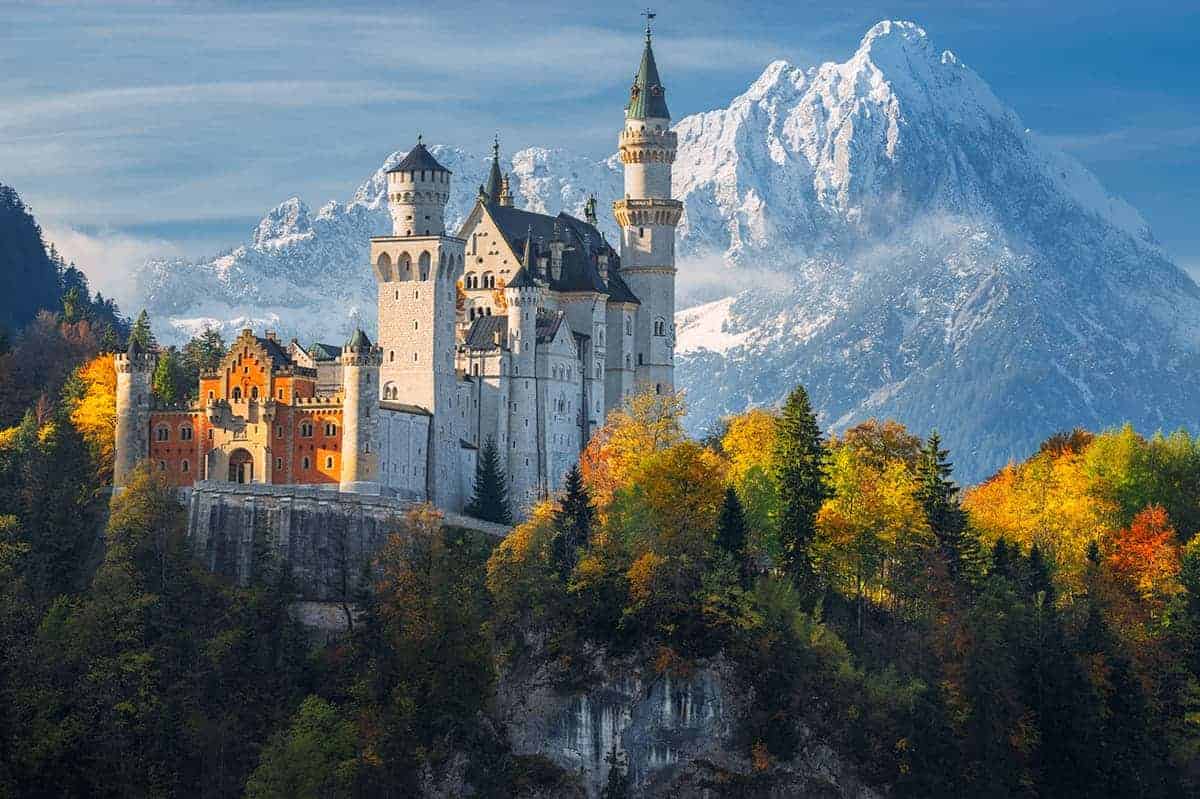 A photo of Neuschwanstein Castle, showing some of the tall mountains that surround this site and contribute to horizon shading.

Aurora’s horizon shading feature takes the surrounding terrain data and scans it to create an elevation profile, like the one shown below. This reflects how much of the sky is blocked by surrounding land features. (This is influenced both by the height of a given terrain feature and how close it is.) Here you can see the closer eastern and southern peaks show up as high elevation points, while the more distant mountains shown in the cover image at the top of this article show up as only around 5 degrees of elevation.

Horizon profiles, like this one for Neuschwanstein Castle, underpin Aurora’s horizon shading analyses.

Using the horizon profile, Aurora calculates the times when the direct rays of the sun are blocked, as well as how the overall diffuse irradiance at the site is reduced by the mountains.

If you look at the monthly Solar Access charts Aurora provides, you can see that the winter months are more heavily affected by the horizon shading; a larger percentage of those hours have the sun blocked by the mountains. Overall, solar access at this site is reduced by 10% as a result of the surrounding mountains!

Failure to account for this source of shading, which would be easy to do without automated horizon shading analysis, would result in a significant overestimate of the solar access of this location—as we can see in the comparison below of the monthly solar access with (right) and without (left) horizon shading.

Given the poor irradiance at this site—not to mention the strikingly steep pitch of the roof faces on this seventeen-story castle—we conclude that installing solar onsite at Neuschwanstein is not a great fit. (We imagine the Bavarian Palace Administration, which maintains this historic site, would agree!) Perhaps a community solar array in the surrounding lowlands could be a better fit for reducing the presumably hefty electricity bills of this building.

While not an ideal site for solar, Neuschwanstein Castle provides an excellent illustration of how horizon shading can have a significant impact on the amount of solar energy available at certain sites with steep surrounding terrain. Aurora is the only solar design software that automatically pulls in terrain data and accounts for its impacts on shading by default.

This, combined with robust international LIDAR data, allowed us to get a precise understanding of the actual irradiance levels at this site in Germany, without ever leaving our California office. Incorporating this kind of remote site assessment for solar prospects can help your solar company save on site visits and close more solar sales.