It’s the holiday season and all we wanted for Christmas was an ITC tax extension. While it wasn’t extended in this year’s congressional session, we’re hopeful that progress will be made to prevent a drop off the cliff from 22% to 0% at the end of 2021.

In the spirit of Christmas, we are taking a look at three places commonly associated with Santa Claus: the Santa Claus House in North Pole, Alaska; Santa’s Workshop in North Pole, New York; and Santa Claus Village in Rovaniemi, Finland. We figured that if Santa is giving away all his coal to naughty children, he’ll need some solar power to keep the workshop up and running!

In our Solar Landmark series, we use Aurora’s solar design and sales software to design solar installations for notable locations around the world, from baseball stadiums to the White House.

Let’s take a look at modeling the buildings and campuses of these Santa-affiliated locations, using Aurora’s SmartRoof design tools, LIDAR and Google Street View, automatic terrain shading, and much more!

The first location we’re taking a look at is the Santa Claus House in North Pole, Alaska. This outpost has been around since 1952 and offers letters from Santa, delicious snacks, and a chance to meet his reindeer team.

North Pole, Alaska has LIDAR and standard-definition imagery. We found that Bing’s satellite image was slightly sharper than Google’s so we switched to that. Examining the building, there are three main sections to focus on: the two-story entrance by the freeway, the one-story midsection with dormers, and a three-story tower. With Aurora’s SmartRoof design tool, we can model each of these as a separate piece, and have Aurora stitch them together to make the full building.

First up is the two-story section. We use SmartRoof to draw the perimeter, which gives us this a hip roof. When we set the edges to be vertical, the roof changes from a hip structure to a gable structure.

The first step of designing Santa Claus House in North Pole, Alaska is to adjust the default hipped roof (left) to a gable roof (right).

Finally, we raise the height of the remaining two edges and adjust the slope so that it fits with the LIDAR data, and then use the dormer tool to add in the two dormers. After we repeat this for the lower section, we get a mostly completed building.

Santa Claus House in North Pole, Alaska can be modeled in multiple sections in Aurora as shown. LIDAR data allows the designer to match the pitch of the roof and other elements to the real conditions at the site.

The tall tower is a little trickier. We start this as an octagon, and set the “diagonals” to be vertical faces, leaving four of the faces to determine slope. We set one pair to have a higher height, corresponding with the front edge of the building, and another pair to have a lower height. This allows us to create this complex shape, following the same steps as any other SmartRoof building in Aurora.

The tower element of Santa Claus House in North Pole, Alaska can be modeled in Aurora by creating an octagon.

After adding in trees to ensure accurate shading analysis, we get our final layout and are ready to add solar panels. 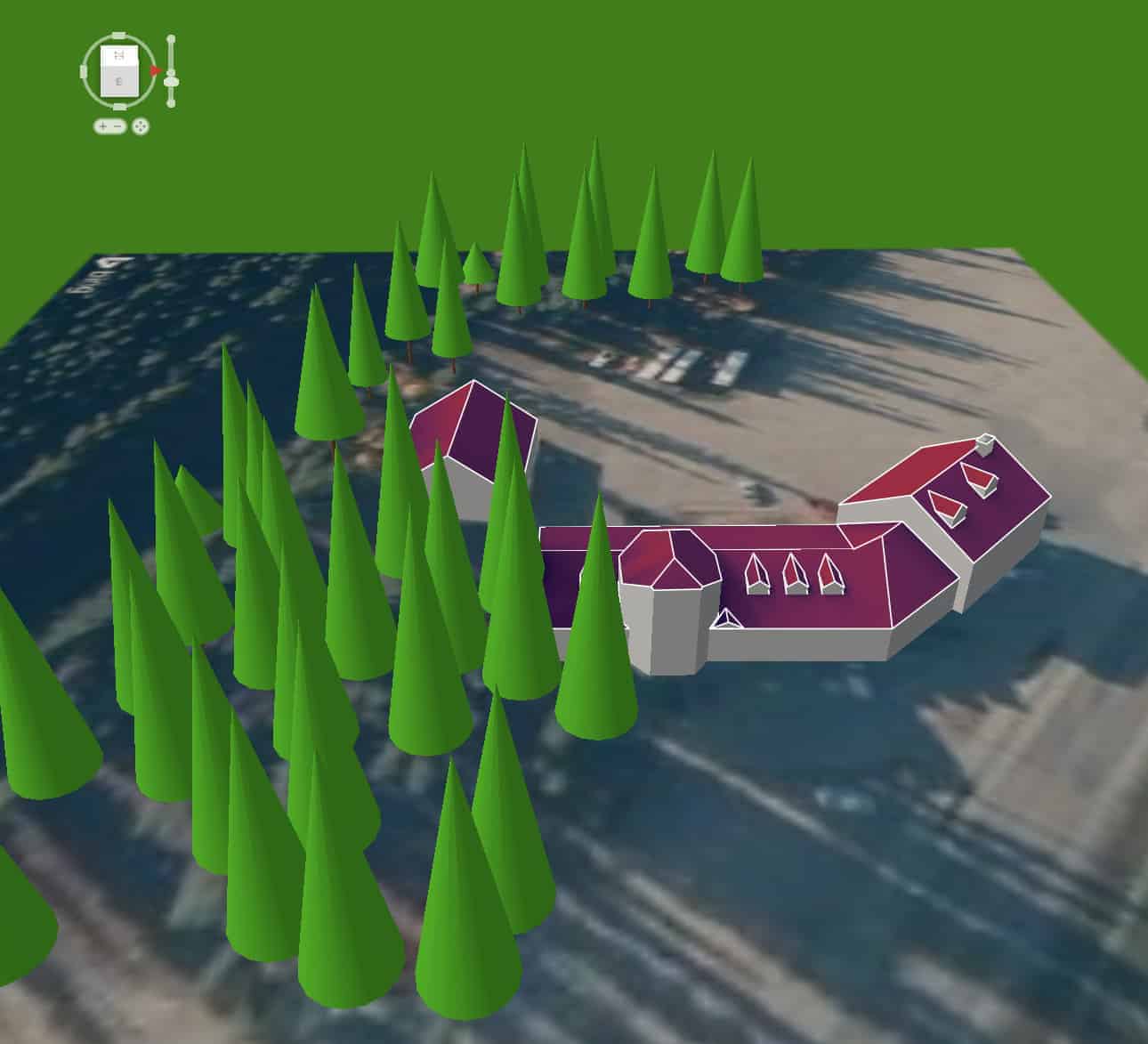 Our irradiance map tells us that the southwest facing section would receive the most sunlight throughout the year, so we’ll start by adding a system there. We filled the roof surface with solar panels, and then used the autostringing tool to automatically connect them, which also takes into account the higher string voltages in the cold weather.

Before we run the performance simulation, we added in monthly snow loss for Big Delta, the closest TMY3 station to North Pole, Alaska. You can get some estimated snow loss data from NREL’s weather stations by checking out our map here.

We entered monthly snow loss values for this location based on the nearest NREL weather station in order to more accurately estimate how much solar energy our proposed PV system would be able to produce.

With the snow losses in place (and assuming Santa doesn’t have his elves clean off the array after each storm), we ran the simulation and estimated an annual production of 19 MWh for the year – a low solar yield compared with sunnier climates like California. Even though the loss factors from snow are quite high in the winter months, snow only accounted for a 7.5% production loss according to the loss diagram, due to the short winter days reducing the light that would have been available in the first place.

We think this might not be enough to power Santa’s toy factory, so we used the carport tool to draw an 80 kW carport over the parking lot (shown below). This brings the production up to 79.1 MWh per year for the site. 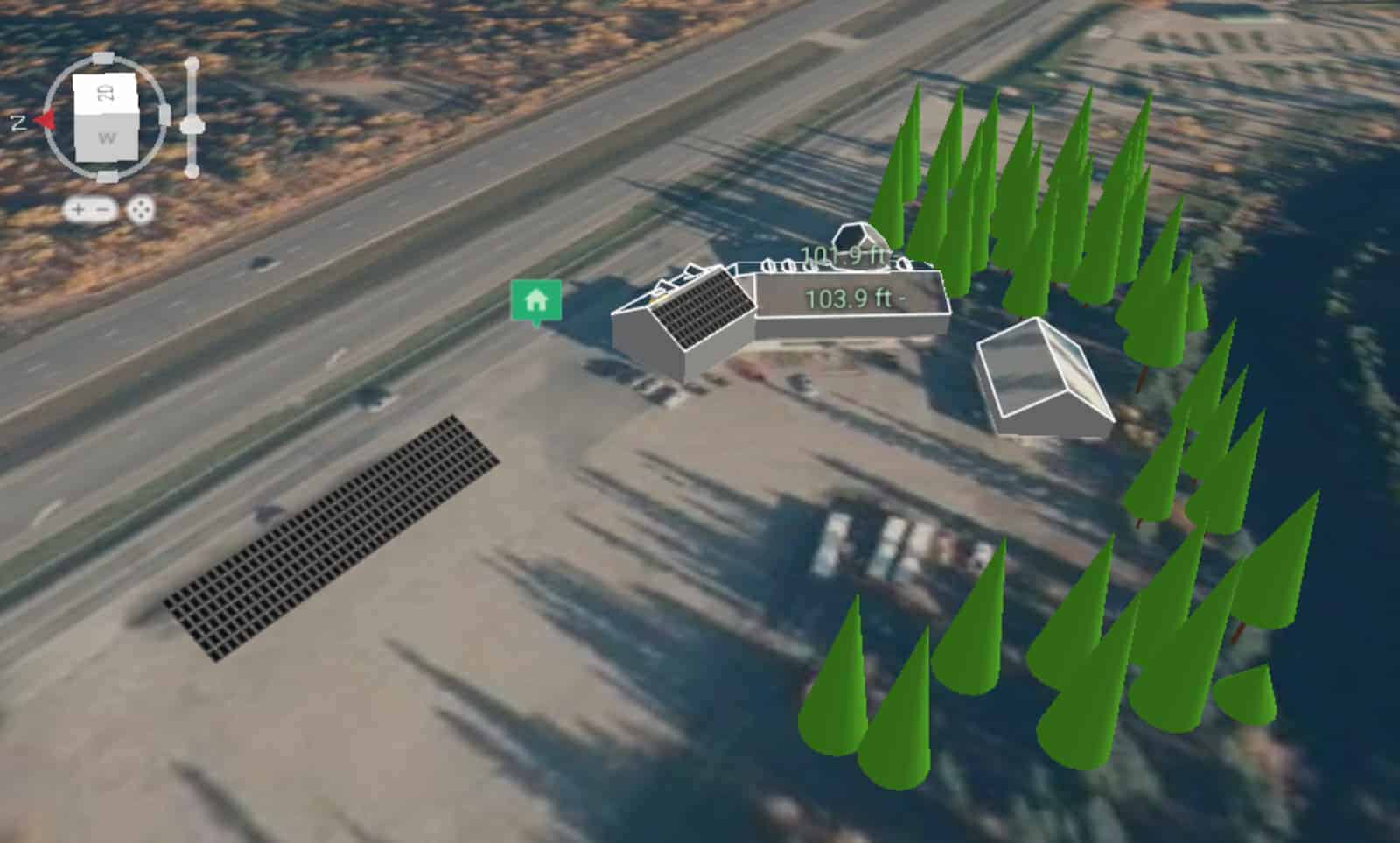 The completed solar design, with a carport, for Santa Claus House in North Pole, Alaska, created in Aurora Solar Software.

Santa’s Workshop in North Pole, New York consists of several small houses that visitors can stop by for last-minute gifts. Each of these can be done with an individual SmartRoof. Since the workshop is on a hill, we chose to increase the heights of all buildings and all trees to match the LIDAR data, ensuring that shadows from neighboring buildings and all trees are correctly assessed. We fit panels onto the two surfaces with the highest irradiance, giving the 39.2 kW system shown below. 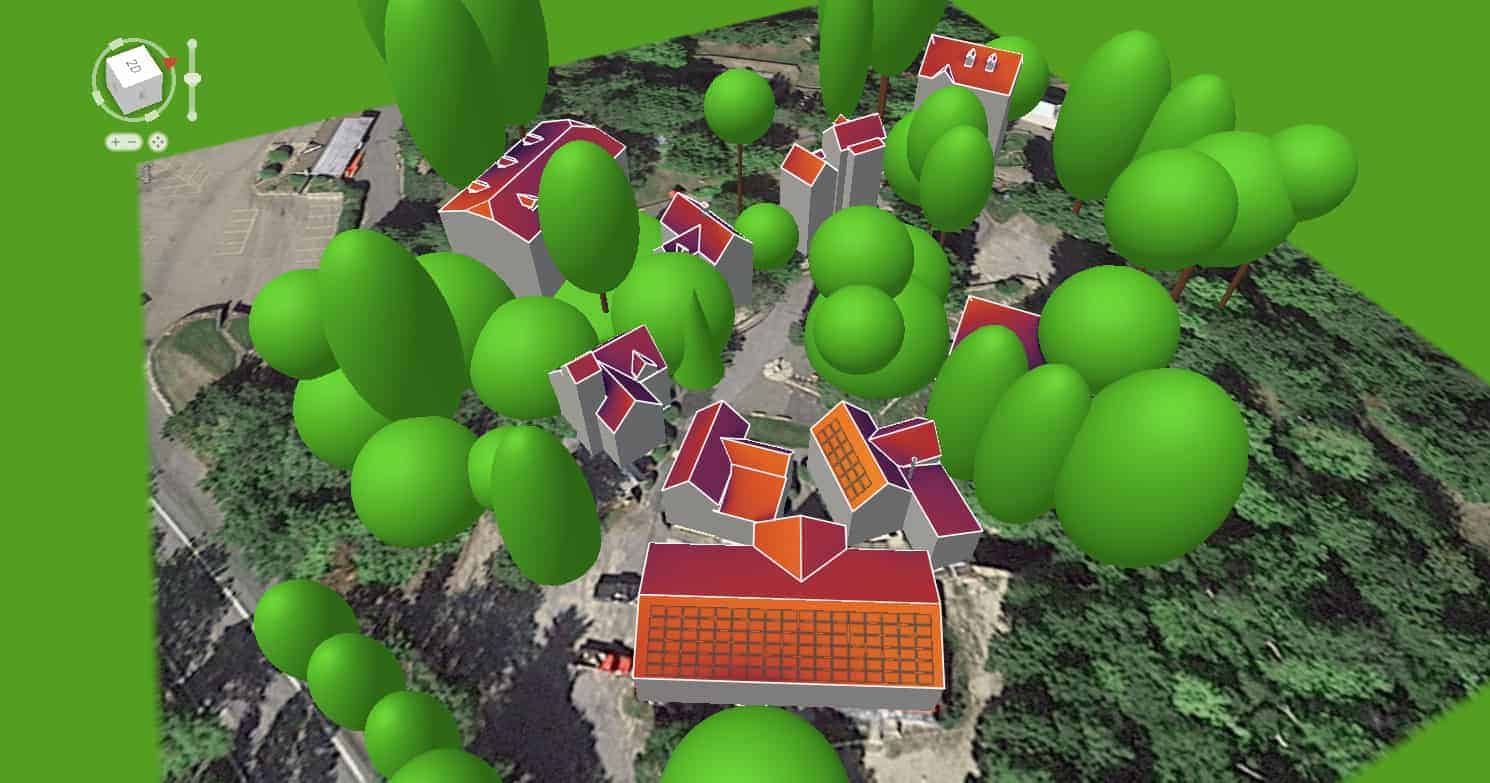 Aurora’s simulation produced a yield of 937 kWh/kWp for a total of 36.8 MWh over the year, making this system a bit better performing than Santa’s Alaskan outpost. Only 4.3% of sunlight was lost to snow by our estimation.

We made sure that automatic horizon shading was calculated for Santa’s Workshop, since the location is surrounded by steep hills. However, we found that this only resulted in a 0.4% irradiance loss over the year, since the panels were placed on faces that look away from the hills.

Santa Claus Village in Rovaniemi, Finland is located within the Arctic Circle, and offers a chance to meet Santa in person. It’s the largest of the sites we’re investigating. As usual, we used SmartRoof pieces to build pieces of each building, letting the software stitch together the parts to create the finished structure. Here’s our site design and system:

While Aurora has added LIDAR in many regions around the world, Rovaniemi does not have LIDAR available. Fortunately, users can use our Street View Ruler tool to measure the slope and lengths of buildings. The measurements are saved in the 3D design view and buildings can be adjusted to match those measurements – in this case, the front entrance has a roof pitch of about 25 degrees.

Using Aurora Solar’s Street View Ruler tool, a solar designer can measure the slope of roof faces and the length of different parts of the building or surrounding objects like trees. The left image shows how you can place nodes on the equivalent parts of Street View and top-down images for Aurora to provide the pitch of the roof; results are shown in the right image.

After completing the village design, we can take a look at the sun path to see what areas are shaded throughout the day. Near the summer solstice, the sun doesn’t set, as shown with the sun path tool: 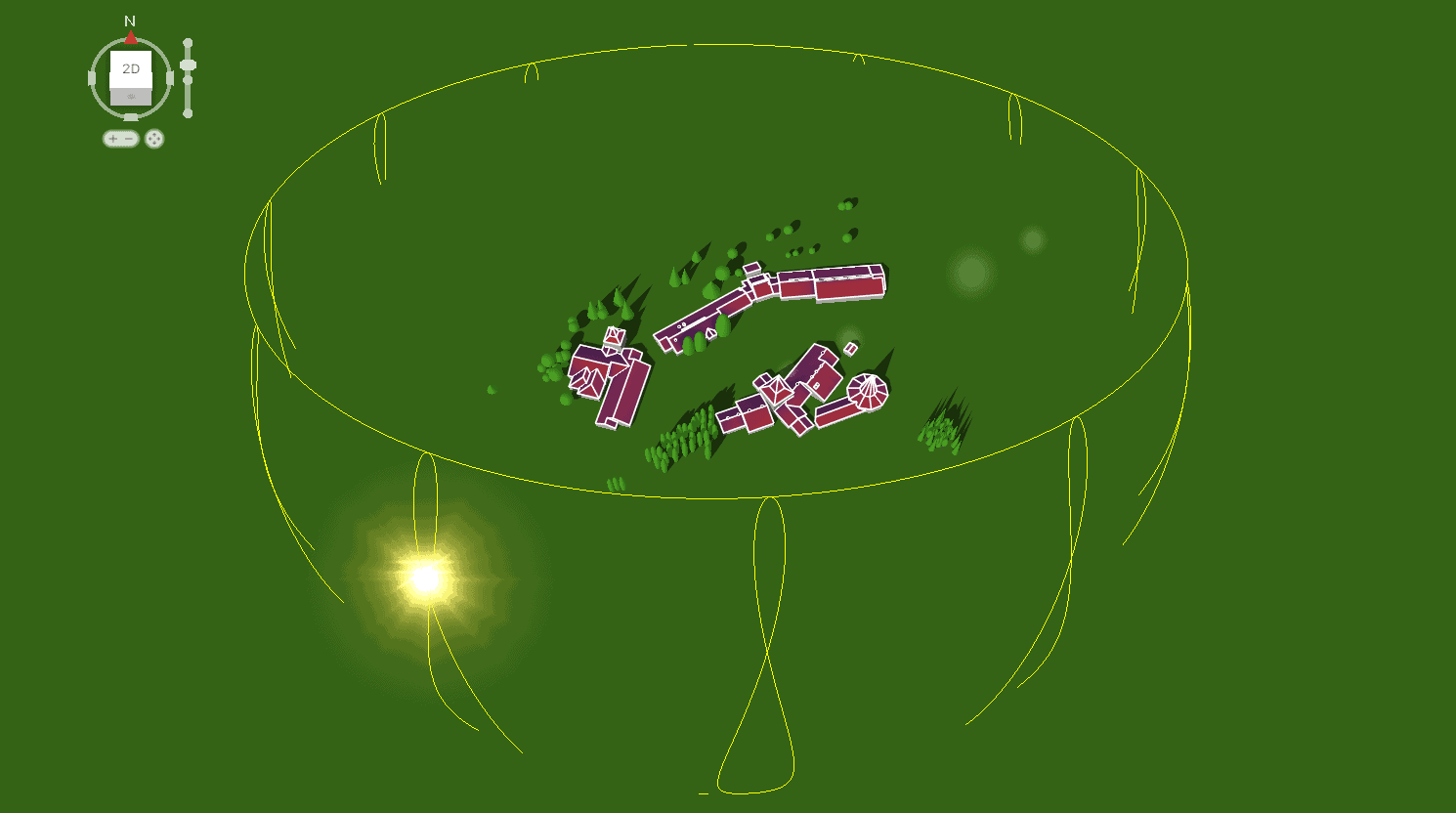 Aurora’s sun path tool shows the path of the sun through the sky at different times of the year. At this location in Rovaniemi, Finland, in the Arctic Circle, we observe an unusual sun path in summer months because the sun never sets.

We fit a 153.4 kW system on the roofs of Santa Claus Village, spread across several buildings, good for an estimated production of 115.2 MWh over the year but with a low yield of 751 kWh/kWp. (Yield measures how much energy, in kWh, is produced for every kilowatt of module capacity under ideal conditions, kWp, over the course of a year.)

Aurora’s loss diagram (which shows how much energy production is reduced by different sources) shows an interesting effect. We have a positive environmental conditions “loss.” This is because the modeled cell temperature was colder than the STC rating conditions of 25C for a good part of the year, which in turn increases the production of the panels compared with the test conditions. Most sites, particularly in hot desert environments, will see a negative value for the environmental loss which also includes mismatch between strings.

Between the three locations modeled, Santa Claus Village presents the most available roof area for solar panels, even though the output per panel will be worse than the North Pole, New York location. We estimate that this system will offset about 2.5 million pounds of coal over its lifetime.

Wherever Santa’s workshop actually is, we suspect that making all those toys requires a lot of energy and think solar could be the perfect gift for the jolly old elf himself. Not only would he and Mrs. Claus enjoy cleaner air, and likely cost savings some great cost savings compared to their current energy source, they’d also be helping to counter the impacts of climate change on their home.

We hope this article provided some insights on how to approach the remote modeling process and helped you see how you can utilize some of the advanced capabilities of Aurora in your solar work. Happy Holidays!

Santa Claus House, Santa Claus Village, and Santa’s Workshop are not affiliated with Aurora Solar Inc. This blog post is for entertainment purposes.