The Aurora Solar team had a great time at Solar Power International (SPI) last week. SPI is the largest solar event in North America. With attendees from over 3000 companies and hundreds of exhibitors showcasing the latest in solar technologies, Anaheim Convention Center was abuzz with activity for SPI 2018!

With all the energy it takes to power such a huge event (at the largest convention center on the West Coast), we were happy to know that some of that energy was coming from clean solar power–quite appropriate!

To keep the fun of the conference going, we took a few minutes to model Anaheim Convention Center’s solar installation in Aurora. In this installment of our Solar Landmark series–where we model solar PV systems for landmarks around the world–we used Aurora’s new and improved design capabilities to quickly generate this large design. It took Aurora’s Research Engineer, Andrew Gong, only about 10 minutes to complete! Here’s how he did it.

The 2.4 megawatt array on the rooftop of the convention center was installed in 2014. According to the contractor that installed it, the system utilizes 7,908 Yingli Solar panels, Sunlink Core RMS racking, and Advanced Energy 500NX inverters. It is owned by the Anaheim Public Utilities (APU) and the City of Anaheim and helps APU meet its mandate to source 33% of its energy from renewable sources by 2020. 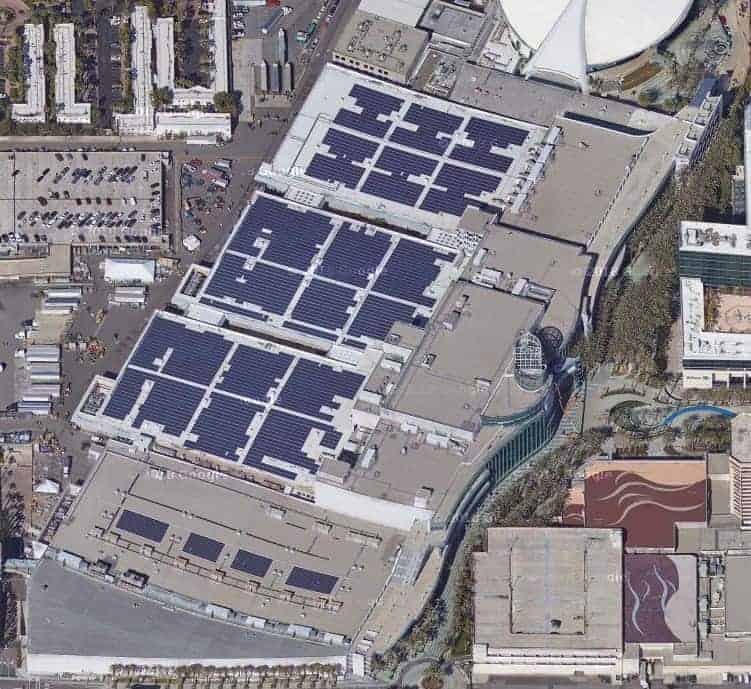 An aerial view of the solar array on Anaheim Convention Center, the site of SPI 2018. Source: Google Maps.

To create an accurate design, we began by constructing a precise 3D model of the convention center. To do this in Aurora, we started by outlining the edges of the buildings in satellite imagery using Aurora’s SmartRoof Tool. 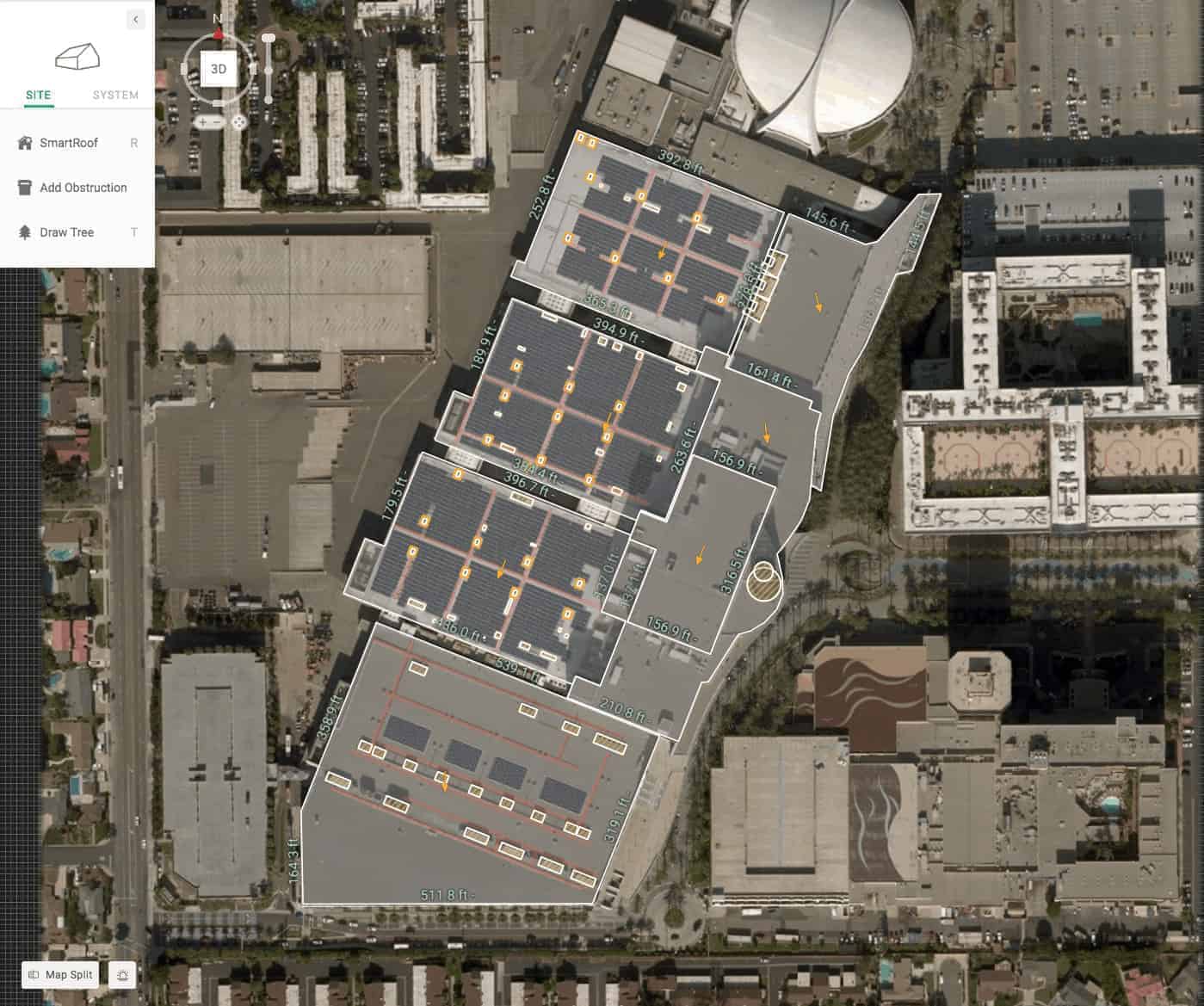 A top-down view of our site model of Anaheim Convention Center. You can see the outlines of the buildings in white. Based on these outlines, Aurora generated a 3D version of the site.

Based on the building outlines, Aurora’s SmartRoof Technology generated 3D versions of the buildings. One advantage of the SmartRoof tool is the ability to construct the building from several simpler parts, which SmartRoof then merges together.

Additionally, because the building has three similar sections (the sections where the solar arrays are located in the image above), we were able to save time by modeling one and then copying it to create the other two sections. This allowed ups to create those sections of the building with just had to make a couple of slight manual modifications.

To save time creating the site model for the convention center, we duplicated similar sections of the site and adjusted them as needed. In this demonstration, you can also see how Aurora’s SmartRoof tool allows designers to construct a larger building out of simpler parts which it then merges together.

Aurora reDesigned, our latest software update, made it easy for us to view the building from different angles:

Aurora reDesigned allows seamless transitions from 2D to 3D views of a project.

Once the structure of the buildings was complete, we had to make sure that the model included any obstructions on the roof–such as skylights and HVAC units–that would prevent the placement of panels.

To save time, we took advantage of Aurora’s automatic obstruction detection tool. Powered by computer vision, this tool allows the designer to model one obstruction which Aurora uses to find all other obstructions like it on the roof.

Once we had a complete model of the site, we used LIDAR to ensure the accuracy of the site. If you’re not familiar, LIDAR data creates a detailed 3D map of the heights of structures in an area, like buildings and trees. The LIDAR data used for these purposes is typically gathered by planes that ping an area with lasers and measure how long they each beam takes to return to a sensor (similar to SONAR but using lasers instead of sound pulses).

LIDAR shows the topography of this area, allowing us to confirm the accuracy of our model of Anaheim Convention Center, where SPI 2018 took place.

We used Aurora’s “Fit Buildings to LIDAR option” to ensure that our model matched the actual building details. With that, we had a complete and accurate 3D model of Anaheim Convention Center–an excellent starting point for designing a solar installation suited to the site.

Before placing panels, we used Aurora’s walkway tool to add appropriate walkways to ensure compliance with local codes. Once walkways have been placed, Aurora will avoid placing panels in those areas, even when automatically filling the roof face.

We then used Aurora’s panel placement tool to quickly place solar panels in the available space. This tool allowed us to click and drag to automatically place panels while avoiding obstructions. The results, modeled on the existing array, are shown below. 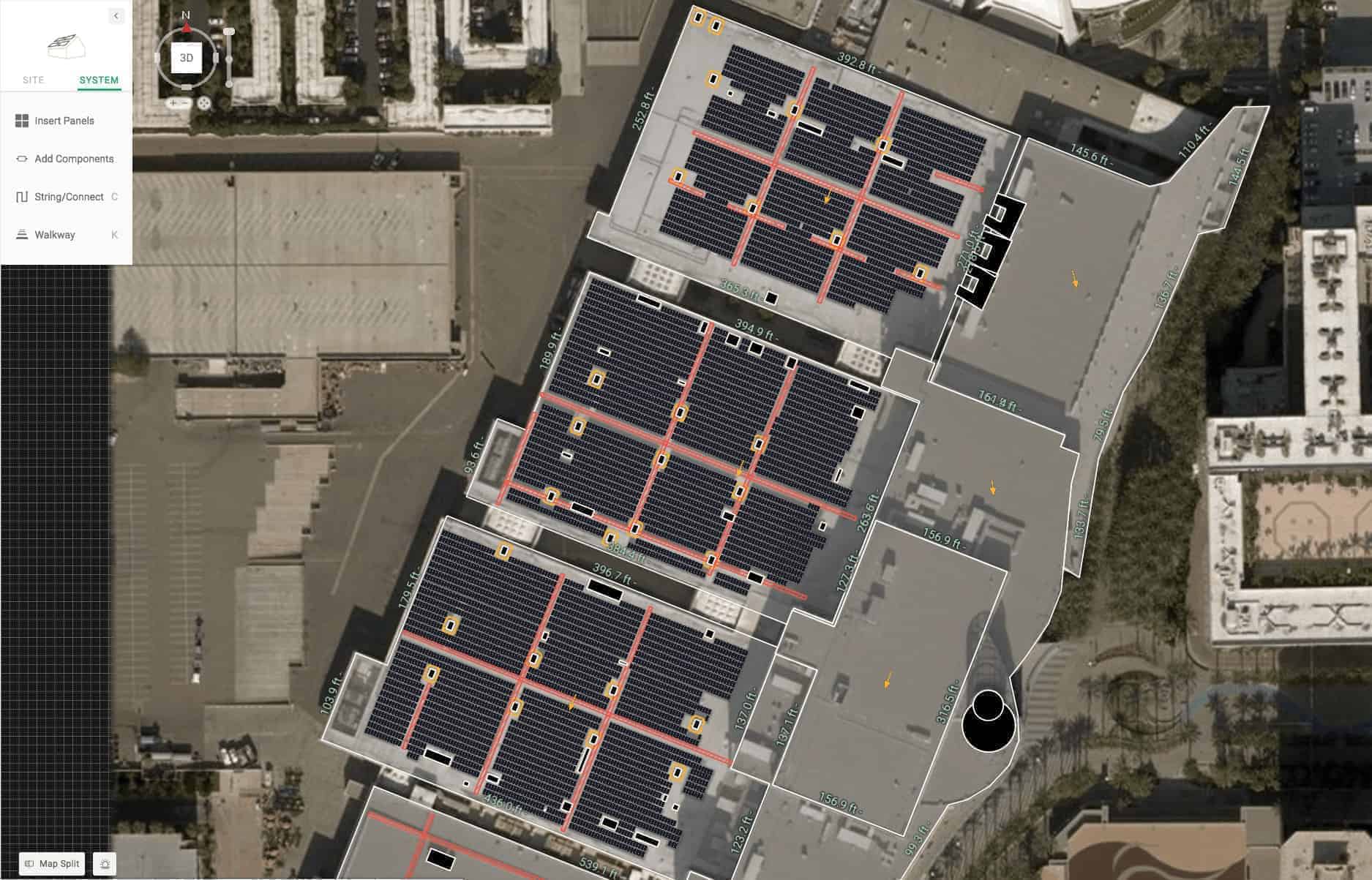 And there you have it! A recreation of the solar array on Anaheim Convention Center, modeled in about 10 minutes. This impressive system produces approximately 302,192 kWh each month and 3,626,310 kWh per year. It offsets 17% of the convention center’s energy needs–making this a great site for an event like SPI!

The final design in Aurora; the yellow shows irradiance on the rooftop.

Notes: Since this was just a quick educational exercise, we didn’t delve into some later steps of the design process, like stringing, modeling energy production, and financial analysis.

Acknowledgments: Special thanks to Research Engineer Andrew Gong for designing this system in Aurora.