As a solar professional, it’s important to be able to explain the process of how a solar photovoltaic system produces electricity. This process seems mysterious to many and misconceptions abound among those unfamiliar with solar energy. In this article, we get back to basics with an overview of how solar installations provide electricity and how the process works for the customer.

Let’s start with the foundations of how solar energy is produced and then we’ll get into the specifics of pv systems.

The Basics of a Solar PV System

Solar PV systems are essentially any combination of solar panels, the hardware needed to help the energy flow through the panels, and inverters.

Depending on the type of system they can utilize string inverters, microinverters, or power optimizers to convert the energy, but the basic makeup of most PV systems is the same.

How Does Solar Energy Work in a PV System?

Solar panels convert the energy of photons (light particles) into electricity (as we discuss in The Beginner’s Guide to Solar Energy). This process is called the photovoltaic effect.

When a photon hits a photovoltaic (PV) device, its energy is transferred from the photon to the local electrons in the material. These excited electrons begin to flow, producing an electric current.

Solar cells (within solar panels) produce direct current (DC) electricity, which is typically converted to alternating current (AC) electricity by an inverter. This allows it to be sent back to the electric grid, which operates with AC electricity, as well as used to power appliances in the customer’s home (or commercial building, in the case of commercial solar installations).

What Happens with the Energy a PV System Produces?

Most solar customers in the U.S. have grid-connected solar installations. Their home is connected to the electric grid, which allows them to use energy supplied by their electric utility when they need more than their solar installation is producing (such as on a rainy day or at night).

It also means that whenever their PV system is producing more than they need, that excess energy can be sent to the grid for others to use.

A policy called net metering, common throughout the U.S., compensates solar customers for this excess energy, so that they can offset the cost of future electricity they use from the grid.

Net metering has played a significant role in making solar energy cost-effective. However, around the country, we are beginning to see some changes in how utility companies implement net metering, many of which reduce the value that solar customers receive from their solar installations.

Feed-in tariffs are another way of compensating solar customers for the electricity they send to the grid in some areas.

What are the Parts of a Photovoltaic System?

It is common practice to refer to all components of a PV system besides the modules as balance of system (BOS) components. Examples of BOS components include inverters, disconnects, racking, and wiring.

Of course, this is just a basic overview of the parts of a solar installation and how they fit together. Explore some of our related articles for a deeper dive into the ways that solar panels and inverters can be wired together (stringing) and some alternatives to traditional inverters, known as module-level power electronics (MLPE).

It is important to note that the process of producing electricity from solar energy is not 100% efficient. Environmental factors—such as temperature, soiling, and shading—as well as losses in the electrical components, can affect the efficiency of a PV system. Typical loss categories include: 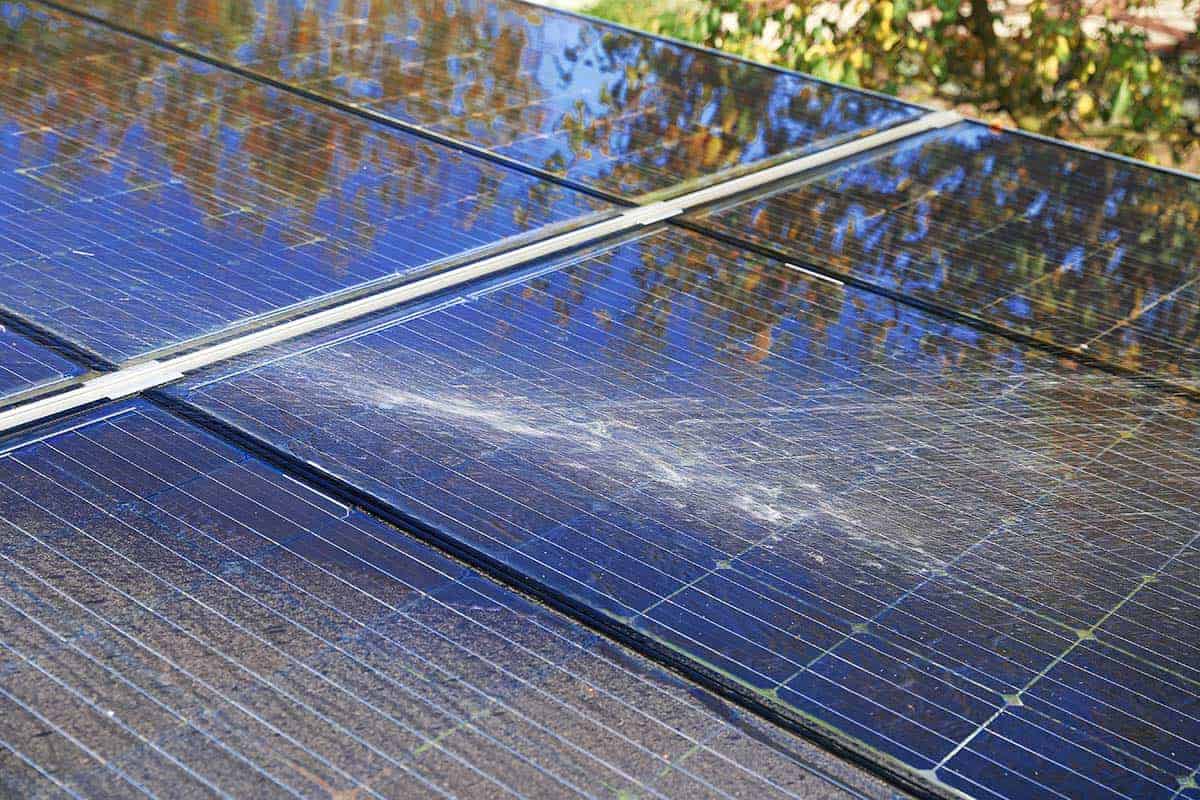 Soiling, such as dust, on PV modules reduces power output.

For a deep dive on these losses see our PV System Losses Series.

However, depending on the system design or environmental conditions, this value can be higher or lower. Advanced solar design software like Aurora can ensure that you accurately determine PV system losses and how much energy your PV system will produce.

Solar panel (module) efficiency denotes what portion of irradiance a module converts into electricity under standard test conditions (STC; irradiance of 1000W/m2, ambient temperature of 25°C). As a general rule of thumb, you can estimate a PV system’s efficiency in converting irradiance into electricity (under STC) using the following formula:

It is important to note that these are merely back-of-the-envelope calculations. To get a comprehensive energy production analysis, you need a software application, such as Aurora, that incorporates all of a PV system’s environmental, mechanical, and electrical characteristics.

How a Photovoltaic System Produces Electricity is part of Solar PV Education 101, a six-article series that serves as an introductory primer on the fundamentals of solar PV for beginners.