How Do Solar Panels Work?

What Components Make up a Solar System?

How Are Solar Panels Made?

How Are Solar Systems Designed?

From fossil fuels to hydro, most energy begins with the sun. Solar panels harvest power directly from this incredible resource by converting photons into electricity.

Solar panels can power an incredible range of energy applications. Solar generation can provide power for a remote cabin and keep the lights on in the International Space Station, but we all know solar isn’t just for providing remote power needs.

As solar panels have gone down in price, they’ve become a competitive energy option for homes and businesses. Aside from saving some green, going solar is one of the best ways a consumer can green their energy consumption. Solar panels provide extensive environmental benefits, potentially eliminating dependence on carbon-emitting fossil fuels and improving air quality.

For these reasons, millions of homes and businesses have “gone solar.” Here are just a few interesting examples:

How Do Solar Panels Work?

Here’s a rundown of what happens from sun-to-plug in a photovoltaic system: Solar energy is radiant light and heat emitted from the sun. It’s harvested in myriad ways, such as photosynthesis in plants and solar heating.

Solar energy for electrical production relies on subatomic particles called photons. These particles start their journey in the center of the sun, traveling through the various layers before careening into space. A journey from the center of the sun to the surface can take anywhere between 100,000 to 50 million years to complete.

Once photons escape the sun, they take a little over 8 minutes to reach earth, where they collide with solar panels and initiate the photovoltaic effect.

A solar panel’s secret sauce lies in its ability to convert photons into electrons. In a nutshell, a solar panel converts photons into direct current, which is then converted to alternate current for use in home and business applications.

Solar cells are typically constructed of silicon, a semiconductor capable of producing electricity. When sunlight strikes the panel, photons interact with silicon atoms, releasing electrons in a phenomenon called the photovoltaic effect.

A solar cell is manufactured with a positive and negative silicon sheet sandwiched together. An upper silicon layer is infused with phosphorus for a negative charge, and a boron-infused bottom layer maintains a positive charge. The resulting field funnels electrons towards conductive metal and out of the panel.

Once the photovoltaic process produces a current, the electricity has to flow somewhere. Since the current produced by a solar panel is DC, it needs to be converted into AC before it can be used in most situations. Once converted to AC, energy from solar can be used in multiple ways.

The most common method is entry into a grid-tied system. A grid-tied system draws a significant portion of its energy needs from solar panels during the day. Depending on the size of the system, more energy may be produced than the site needs, so surplus electricity is sent back to the grid. When the sun goes down, the consumer draws supplemental energy from the utility.

While grid-tied systems aren’t completely self-sufficient, they’re an effective way to lower energy bills and do good for the environment.

A major advantage of a grid-tied system is the ability to sell surplus solar energy back to the utility through a process called net metering. On cloudy days and during the night, a solar system may not produce enough energy to meet demand. The opposite is true for very sunny days: When energy use is low but production is high, panels will collect surplus energy, usually more than enough for a customer’s energy needs.

Net metering measures electrical flow in both directions: How much energy a system draws from the utility, and how much is put in. When a solar system is overproducing, the meter actually runs backward, resulting in the utility company rewarding credits for the surplus power.

These credits can be used to purchase energy from the utility when a solar system isn’t able to meet demand.

What Components Make up a Solar System?

Let’s take a closer look at the important components that make up a solar system.

A typical solar panel consists of silicon cells, a metal frame, wiring elements, and glass. An insulative layer and a protective back sheet protect the panel from excessive heat and humidity.

While the general construction of solar panels is pretty standard, the silicon cells are manufactured in two distinct formats:

Mono and poly cells serve the same purpose. Aesthetics and budget will help you determine which is right for your next project. Mono panels tend to have a darker, more uniform color, while poly panels are lighter (usually blue). If the site is space-limited, mono panels may be the way to go thanks to their higher efficiency. But if space isn’t an issue or you’re up against a tight budget, poly panels are still an excellent choice.

Solar energy comes right off the panel as direct current. But the energy needs to be converted to alternate current before it can be used in a commercial electrical grid. Thankfully, DC is easily converted to AC, a job left to an inverter.

Inverters are classified into 4 broad categories:

Racking and mounting hardware do far more than secure panels to a roof or the ground — they provide the correct positioning for maximum exposure to the sun. Selecting the right mounting configuration and position is essential for ensuring maximum output from any system. A performance monitoring system offers information about energy output and consumption, optimizes energy usage, and can inform you about problems in your solar system. Solar monitoring systems work through inverters, usually through monitoring software that runs liaison between the inverter and other devices.

How Are Solar Panels Made?

Basic solar panel constriction hasn’t changed much in recent decades. Like the arrays that first started showing up on houses decades ago, most modern solar panels are still constructed of a silicon matrix between a front glass plate and rear polymer sheet.

Solar panels have to stand up to severe weather conditions over the course of their 25-plus year lifespan. The best solar panels are engineered to stand the test of time, which requires a few basic materials and meticulous manufacturing standards.

Silicon, the element that gives solar panels their electricity-generating magic, is the active ingredient in the solar-panel-sandwich recipe, and also the most energy intensive to produce. Silicon is one of the most abundant elements on earth, and is the main component of beach sand. But converting sand into pure silicon suitable for solar panels is an energy-intensive process requiring refinement in high temperature arc furnaces.

Once silicon is refined, the raw product is ready to be manufactured into a solar panel. 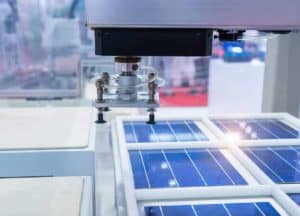 Isolated silicon chunks are shaped into cylindrical ingots, with special attention given to proper atomic orientation. At this stage, boron is added to give the silicon a positive charge. Ingots are then cut into thin wafers the thickness of paper, then treated with an anti-reflective coating to help better absorb sunlight.

Next, conductive metals are added to the surface of each wafer. Phosphorus is diffused across the surface, providing a negative charge to balance the positive charge of the boron and allow controlled flow of electrons.

At this stage, an individual solar cell is complete. Next, cells are soldered with metal connectors into a matrix. This assembly is sandwiched between a protective back sheet and glass covering and finished off with a junction box and frame.

How Are Solar Systems Designed?

Two important factors are considered when designing solar systems: available space and energy demand. All the nuts and bolts of solar system design hinge on these two factors, so a thorough understanding of them is essential to a well-planned solar installation.

Of course, the ins and outs of how solar panels work are just the first step. If you’re looking to learn more about solar and the solar industry, here are some additional resources:

The Solar 101 section of our blog has a number of other resources, as well, to help answer all your solar-related questions.

Schedule a demo today and fast-track your next solar installation project.