Green banks, a new type of financing institution for clean energy and energy efficiency, are spurring dramatic growth in solar. Here’s how they work and why solar contractors should get to know their programs.

It’s a scenario that replays over and over again. You sit down with a customer who’s eager to power their home or business with solar and save on their electric bills. They love the idea of installing solar, but then you hit the roadblock—the upfront cost of the project is a major sticking point.

In the best cases, financing is available to cover or reduce the upfront costs. But all too often, that’s not the case—especially for certain groups like non-profits and low-income customers. If financing is available, it may only be available at interest rates that are so high that the project becomes undesirable, because the customer will be unable to achieve immediate savings.

These gaps in financing have long closed off the solar market to many interested consumers. But this is starting to change through the work of green banks, a new type of financing institution emerging around the country and around the world.

What Is a Green Bank, Anyway?

Green banks are government-affliated banks that use limited public funds to drive greater investment in clean energy by the private sector. The goal of green banks is to “accelerate clean energy market growth while making energy cheaper and cleaner for consumers, driving job creation, and preserving taxpayer dollars,” according to the Coalition for Green Capital, a nonprofit that has supported the development of numerous green banks around the country.

This mandate of driving greater investment in clean energy from the private sector is central to a green bank’s approach. Given the relatively short track record of renewable energy projects and limited data to assess risk, private financing partners are often apprehensive about funding projects or will only offer financing at high interest rates. This presents a major barrier to the growth of clean energy markets. Green banks help make private financiers more comfortable investing in clean energy by using public funds to reduce real (or perceived) risks, and by providing the security of a government partnership.

Other core characteristics of green banks are the use of innovative financing structures, a focus on cost-effectiveness, and the fact that they are “independent authorities with a degree of latitude to design and implement interventions,” according to the Green Bank Network (a knowledge-sharing network of green banks around the world). Compared to commercial banks, green banks are able to invest with greater flexibility, allowing them to bridge the gaps in financing available from private lenders.

Green banks focus their work on mature, commercially-viable clean energy technologies—like solar—rather than early-stage technologies in the R&D phase, focusing on addressing the market barriers that limit their access to capital. 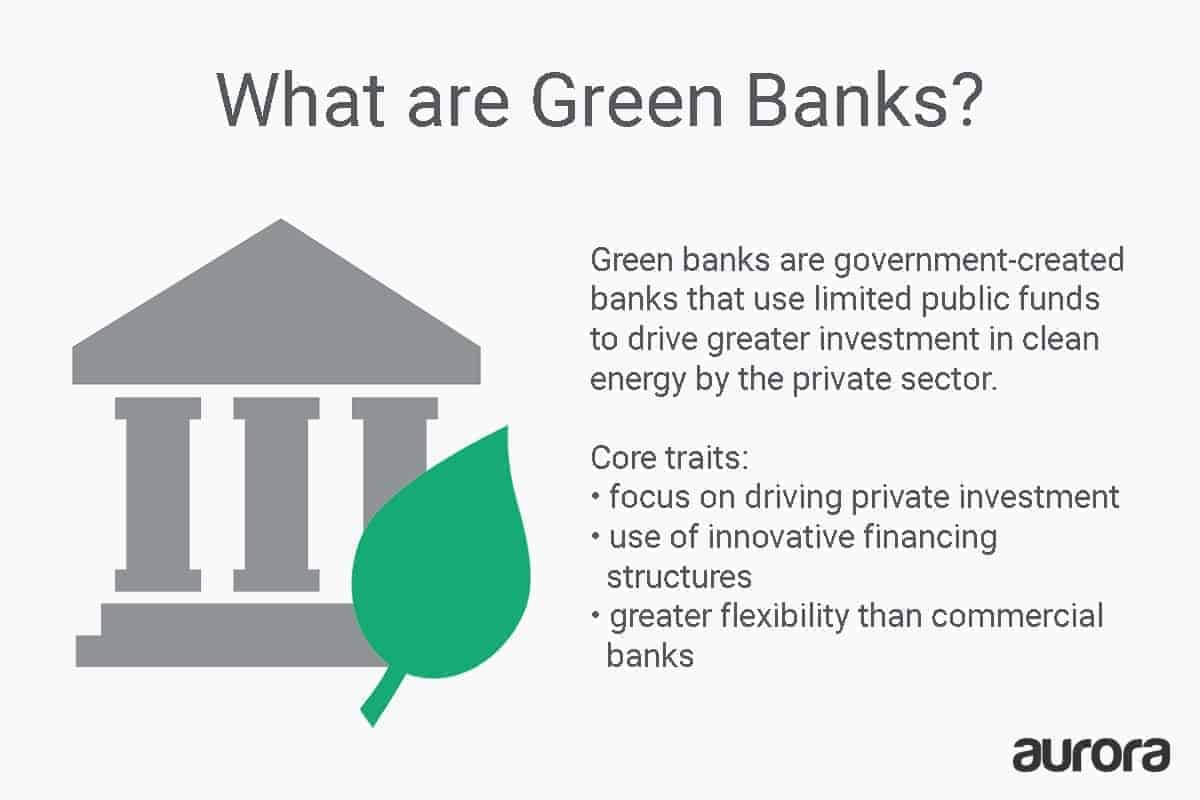 What Services Do Green Banks Offer?

Some of the financial services offered by green banks include:

Credit enhancements, such as loan loss reserves or loan guarantees, can increase private lending by reducing the perceived risks. Co-investment can fill gaps in available financing and, in some cases, also acts as a form of credit enhancement.

Where private lenders are unwilling to provide project financing, even with credit enhancements, green banks may lend directly. This may be the case when private banks find individual projects too expensive to underwrite, as is often true of small projects like residential energy efficiency projects. The green bank may eventually bundle many individual loans together, making them more attractive by diversifying risk and achieving scale, and then sell them to private lenders. (These services are also referred to as warehousing or securitization.) 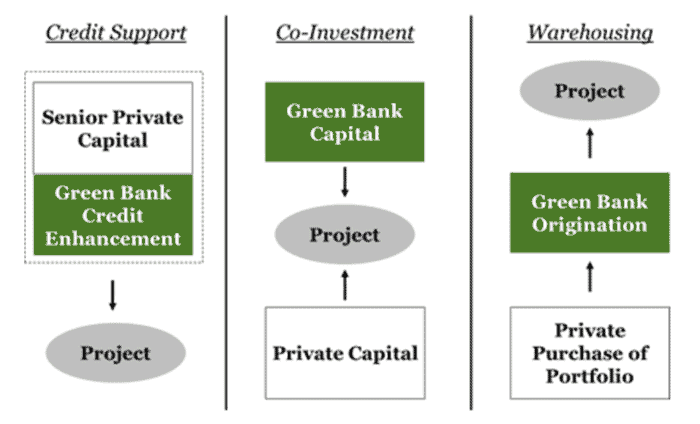 An important characteristic of green bank services is that for each public dollar spent, much more private capital is made available. For instance, the Connecticut Green Bank reports that for every $1 it spends, $6 of private investment in clean energy is committed.

Green banks have been established with a variety of different structures and strategies depending on their local contexts. For instance, whereas the Connecticut Green Bank offers retail programs that connect individual solar customers with loans from banks and credit unions around the state, New York Green Bank operates only at a wholesale level—working with project developers and financiers on multi-million dollar investments.

In Hawaii, which has the highest electricity prices of any state, solar energy is affordable compared to utility electric prices so many residents have installed solar. However, access has lagged for low-income communities that most need the cost savings. As such, the Hawaii Green Infrastructure Authority has focused on solar for low-income customers.

Unlike state agencies that offer rebates and other grant-based incentives for clean energy projects, a green bank can make public funds go further. Whereas grants are used up as soon as they are distributed, green banks focus on services like loans in which public dollars are repaid to the bank and can then be recycled to drive further growth in clean energy markets.

In addition to making government funds go further, green banks are focused on driving economic growth in the regions where they operate. By making clean energy investments more accessible to citizens, they put money back in the pockets of households and businesses through energy savings. By growing the customer base for solar companies and other clean energy businesses, they also contribute to job growth.

As the dramatic economic and environmental impacts of green banks become clear, many other U.S. states and jurisdictions have expressed interest in establishing their own such banks. Among the states exploring green bank creation are Delaware, Virginia, Colorado, Missouri, Massachusetts, and Washington, DC.

Both New York and Connecticut Green Banks have committed to helping other states replicate the green bank model—and New York Green Bank has recently announced plans to expand its lending operations to the rest of the country! 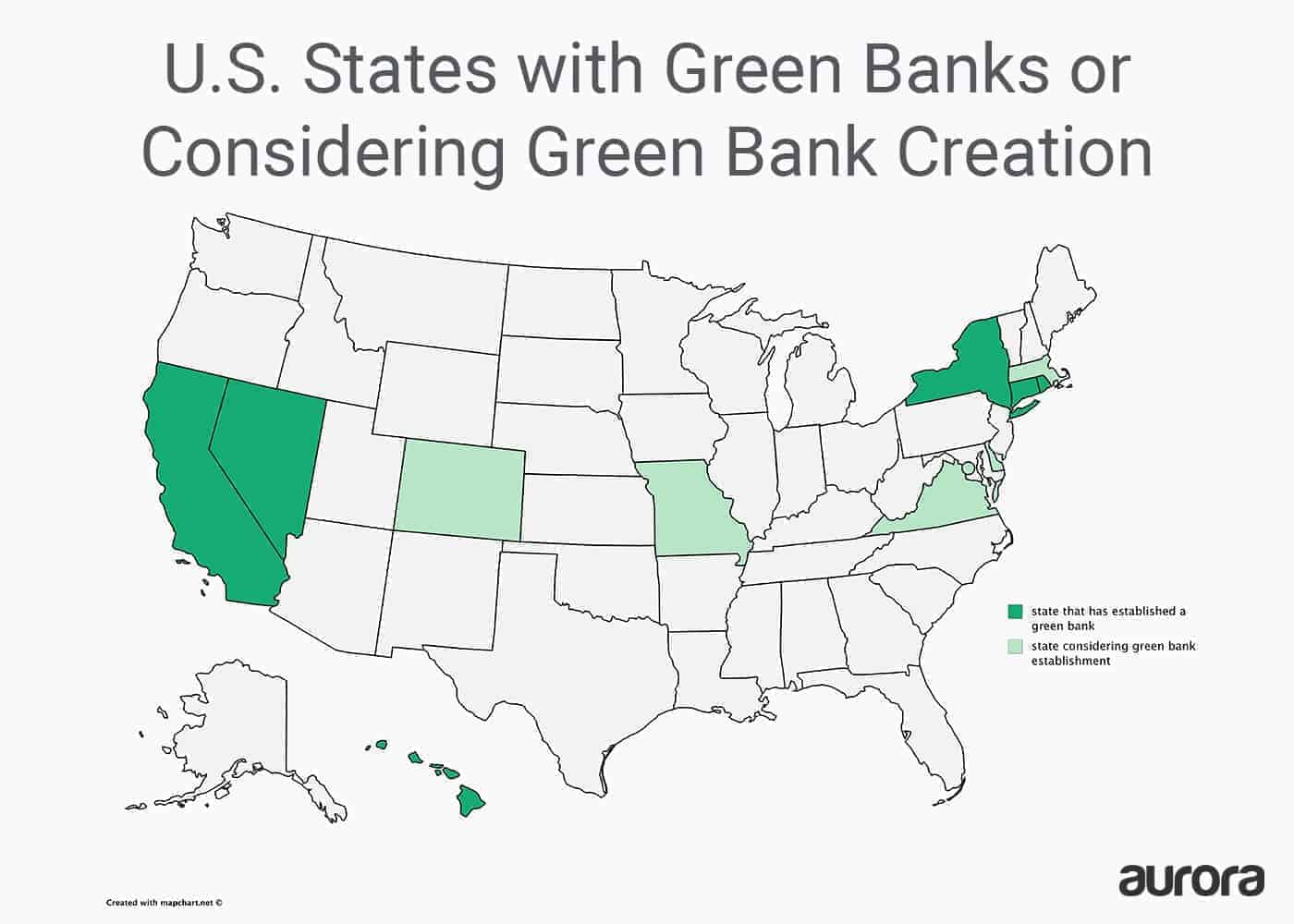 Why Green Banks Matter to Your Solar Company

Clearly, green banks represent an important new tool for driving growth in clean energy and energy efficiency markets. As more and more states eye options to meet climate change commitments, increase resilience, and drive economic growth, it is likely that green banks will play an increasing role around the country.

This is great news for solar contractors because green banks increase the accessibility of financing to cover the upfront costs of a solar installation—typically the biggest barrier for prospective customers.

If there’s a green bank in your state (or city or county), it’s an excellent idea to get familiar with its programs and the benefits they can offer to prospective clients—because it may make the difference in closing the sale. (The Coalition for Green Capital maintains a list of current green banks which is a helpful starting point.) Many green banks also manage databases of approved contractors to help guide interested solar customers on choosing a company—so you should look closely at those programs and consider getting involved.

We’ve been talking with green banks around the U.S. to understand their programs and what local solar contractors need to know. Check out our two-part series sharing what we’ve learned!