This is an installment of our Solar Spotlight series. Click here for our last interview!

The students of San Ramon Valley High School have to vie for parking spots on campus. Parking is a nightmare. According to one student, the demand for spots is so high that she rents a parking space from the Chinese restaurant across the street.

After all, who wouldn’t want to park in their lot? In 2011, the San Ramon Valley Unified Schools District installed a solar PV carport structure over the lot. They probably have one of the coolest parking lots in the Bay Area – the sun-tracking solar panels shield cars from the California heat, while generating two-thirds of the school’s electricity too. 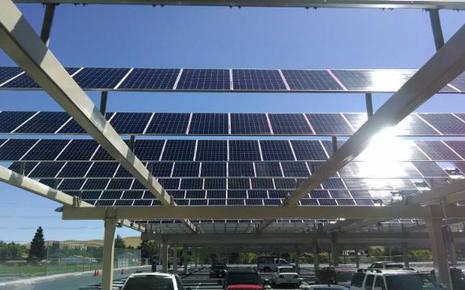 Carports with solar panels were also installed in four other schools in the district. The cumulative 3.4-MW system is expected to generate two-thirds of the electricity needed to power the five schools.

The project was not cheap: the $25,000,000 construction and design costs were funded by Qualified School Construction Bonds (QSCBs), meaning that the school district did not have to pay out of pocket for the solar installation, or any interest later on.

And that’s not even the best part: the system will eventually pay for itself in energy savings after 16 years, and will save them millions for years to come.

Along with many other California schools, the San Ramon Valley district experienced budget cuts adding up to $20 million within five years. With their savings on electricity, the district can still invest in teachers and health resources for its students. And the students never have to worry about their cars overheating. San Ramon Valley is a great place to go to school.

But the same is not true for the rest of the California. Back in 2011, the Department of Education published a report that indicated 40% of low-income schools are not receiving their fair share of funding. While the state has made efforts to restructure the school funding formula, California public schools are still lacking between $22 and $42 billion in funding, according to the California School Boards Association.

California public schools spend over $700 million on energy every year according to the California Energy Commission. So why aren’t more districts installing solar carports and saving money like San Ramon Valley?

Last week, I visited the four summer fellows of the Stanford Solar Schools Project, an initiative funded by the TomKat Center for Sustainable Energy. The undergraduate fellows spent eight weeks of their summer break addressing this exact issue.

To begin, the team reached out to several government agencies to learn about their projects. For example, Proposition 39 is set up to help schools with energy efficiency and other energy projects through grants. While funding schemes are available for schools, getting the money isn’t easy.

“There are a lot of programs out there, but it’s difficult for schools to find out about these programs and find the time and resources to fill out some of these applications, which are very expensive,” said Sneha, a junior majoring in Civil and Environmental Engineering.

Schools have to submit a proposal before obtaining any sort of government loan. The upfront cost for proposals from solar procurement specialists or consultants “can be upwards of $20,000.”

“And that’s just to get the study done. You could pay the twenty grand, have the study done, and have them be like, ‘Sorry, it’s not gonna work.’” added Trevor, a sophomore studying Management Science and Engineering.

The schools that have managed to install solar on their own are typically from larger school districts that have initial funding already available, corporate sponsors, or dedicated resources. “The San Ramon Valley has a solar panel research committee set up,” explained Claudia, a rising senior majoring in Mechanical Engineering. The Los Angeles Unified Schools District has a sustainability person in charge, “because they’ve had other projects before and they’re huge.”

Given these obstacles, the team began by mapping out the information gaps and making this accessible to schools.

The team compiled background materials that schools normally would had to spend weeks looking for, accompanied by a model of what a solar installation would look like on their own campus.

To guide the schools, they put together publicly available background materials. A brief three-page Action Plan, details all the steps to installing solar — from considering its impacts on a community, all the way to acquiring funding and beginning construction.

Their Policies, Regulations, and Resources document lists major sources of funding for schools, “for them to figure out how in the world they’re gonna pay for this,” described Chewy, a junior majoring in Earth Systems,.

In addition to Prop 39, loans are available. Schools could take advantage of the IRS Clean Renewable Energy bond. Trevor described it simply: “The district is the bond issuer. They find a bank to be a bondholder. The government pays the interest to the bank. So for the school, it’s basically a zero-interest way to install solar.”

Another option is the Qualified Zone Academy Bond (QZAB), another zero-interest plan. A private entity matches the bond value by 10%, either in cash or services, which helps fund the school’s academic programs, such as a renewable energy curriculum.

“So what we’re trying to do is provide resources, as well as connect them with organizations that help schools with this process,” said Sneha.

“Now we’ve started looking at individual schools and designing solar plans for them along with long-term financial analyses in Aurora,” said Chewy.

Their goal is to convince each school that not only are they able to afford solar, but that the installation will prove to be an economically savvy move throughout the lifetime of the project.

“It’s possible what we’re doing with Aurora can cost schools a lot of money as well. Just providing this initial feasibility assessment with the starting point models that we’re generating helps a lot,” said Sneha.

The team hopes that the schools will bring the solar plan they generated in Aurora to the Bright Schools program, which provides free consulting up around $20,000. From there, the schools could apply to larger funding programs based on their solar designs.

To create the solar designs, the team needed the school’s energy consumption data and electric rates. The information was either provided by the school or from the online database of the California Energy Commission, which contains data from 400 schools across the state.

They imported the information into Aurora to closely model the load profile and potential energy savings of these schools. Then, they used the software to model the system in 3D, estimate the system’s energy production, and run a financial analysis, saving them from the hassle of having to go to the schools.

A school could save anywhere from $40,000 to $125,000 per year with a 313 kW solar PV system, according to estimates from the Environment California Research & Policy Center.

Since the designs needed to be as realistic as possible, the structural integrity of the school roofs was a key consideration. “Some of the roofs of the schools that we’re working with are really old, so probably couldn’t support the weight of solar panels,” said Claudia.

“So most of our designs are carports or some sort of shading structure on the school grounds,” she added, which also explains why carports are more popular for older schools, like in San Ramon Valley. In addition to carports, ground mounts could also be installed on unused property.

Over the course of the summer, the Solar Schools Project team modeled unique solar designs for 26 low-income schools across 10 school districts in California, serving a total of 20,910 students. Each proposal was complete with a shading analysis and financial estimates. While their skill with solar design can now rival that of some installers, they know that they have only scratched the surface, and that designing the models is only the first step.

While the team always waits for schools to express interest before sending the solar design proposal, they have to put faith in the superintendents and the facilities managers at the school to move forward with the project.

“We’ve shown them all the money they can save, proven that it’s worth the investment, and directed them to all the financial help they can get out there,” said Chewy.

Claudia expressed her concern that the receiving side might lack motivation: “We’re worried that they’ll think that it’s a good idea and that they’ll agree with us, but that no one is actually pushing to take action on the next things that are involved, like more work or more money going into it.”

The power of local advocates

Even though the team has realized that there is only so much they can do from a distance, they still have hope for their proposals.

“We’ve learned the importance of the local advocate for our projects,” said Sneha. “They’re the people we’re trying to connect with, and we’re trying to give them tools to champion their project.”

All of them agreed that bureaucracy in the school system was expected, but the extent of it was still shocking. The processes can take months in the school districts, given complications with multiple stakeholders: the superintendent and the community, as well as the three-year turnovers in school boards.

“There are a lot of hoops to jump through,” Trevor reaffirmed Sneha’s statement, “That’s why again it’s so important to have a champion at the local level.”

The team has discussed using their research to make policy suggestions. They have become quite adept at navigating funding and other processes involved with solar installations for schools. “We want to give recommendations to actors at the state government level so that they can make those processes a bit simpler, based on what we’ve learned this summer.” said Chewy.

Perhaps the best local advocates are the high school students themselves. Trevor hopes that the implementation of a solar project will be a community-wide effort.

“If these superintendents get this big packet of information that we’ve provided, I can see high schoolers just jumping all over it and going to school board meetings and promoting it on a regular basis. That’s what happened in that San Ramon Valley.”