Net metering (NEM) policies, which provide customers with credits for excess electricity produced from their home’s solar panels, have been important in spurring the adoption of PV systems. Recently, however, some utilities have begun removing or changing NEM policies, either by modifying the credits provided or by trying to remove net metering altogether.

Rocky Mountain Power in Utah is one of the utilities that offers a NEM alternative in their transitional tariff. Rather than compensating solar production at the full retail rate (typically 8.8 – 11 cents per kWh for residential customers), owners would get paid a flat 9.2 cents per kWh for their exports. This was a fair deal for a while as it was pretty close to the retail rate.

At the end of October 2020, Utah’s Public Service Commission (PSC) granted a Rocky Mountain Power request to reduce that export credit from 9.2 cents per kWh down to 5.6-5.9 cents per kWh, seasonally adjusted. This change is applied to new customers going forward – those with existing systems will still continue to enjoy a fair export rate.

In this blog post, we crunch the numbers to see if solar is still feasible in the beehive state.

What has Changed after the Rocky Mountain Power Credit Cut?

The biggest change to the net metering tariff in Rocky Mountain Power territory is that excess solar energy exported to the grid – shown in yellow in the chart below – receives lower compensation than before.

A homeowner’s bill can be divided into three parts. First is the sum of all the charges they accrue (blue). From this we can subtract the credits they receive for any excess energy their solar panels produce (yellow). The green section is energy that the solar system produces during the day and offsets any energy being consumed at that time.  The yellow export section used to be valued at 9.2 cents per kWh, and now it’s down to 5.9 cents in the summer, 5.6 in the winter. 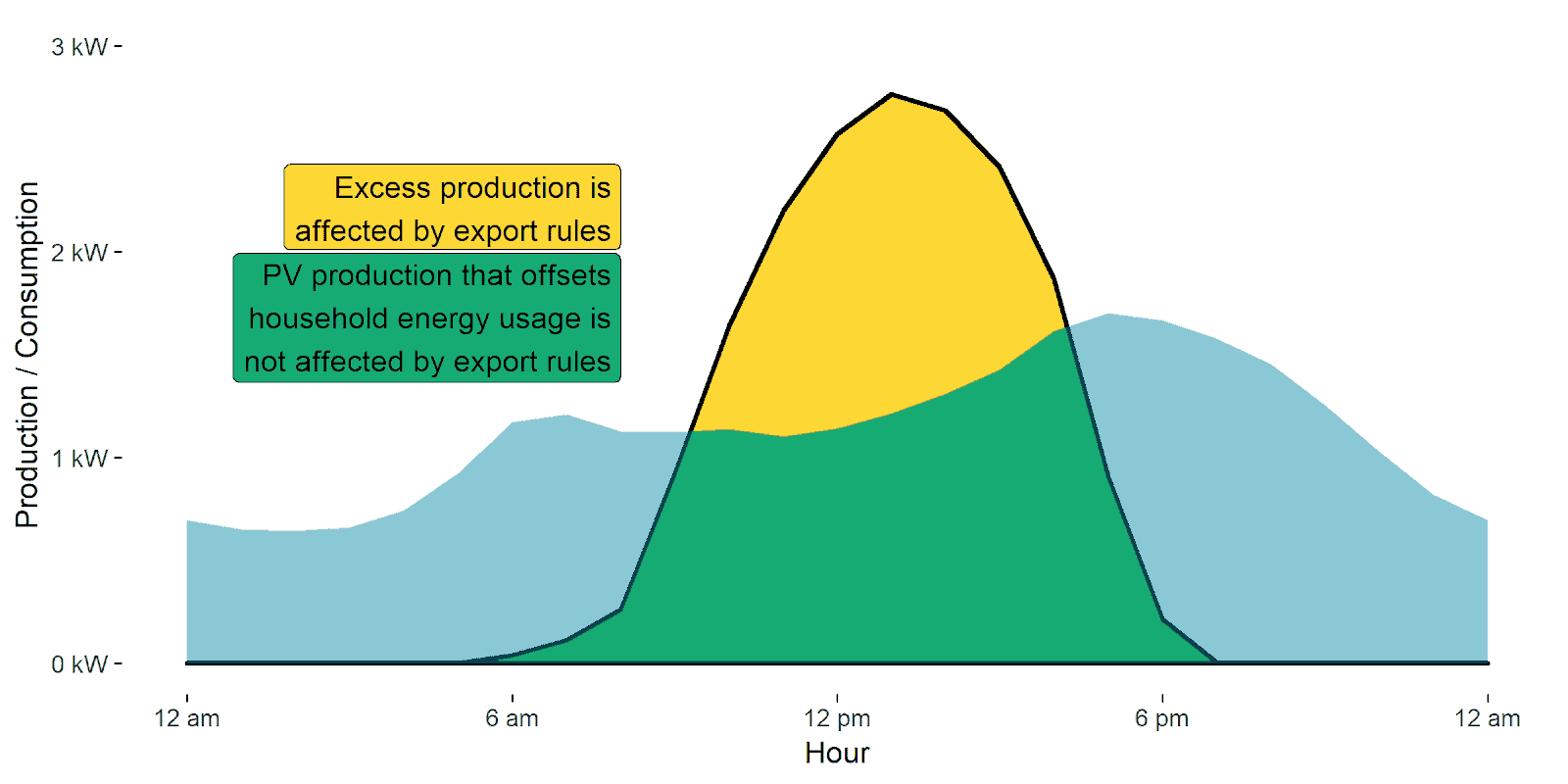 Customers who export energy will see less credits for that portion of power, and therefore reduced bill savings. We’ve estimated that a PV system which offsets 100% of the homeowner’s energy usage will still end up exporting 50-70% of those kWh to the grid during the day, and the house will buy that energy back during the off hours.

If you take an average house using 10,000 kWh per year that has a 100% energy offset for the year and has 40% self-consumption, then 6,000 kWh will be exported to the grid. Under the previous export rate, the homeowner would receive $550 in bill credits for that energy, but under the new export rate, they would only receive about $350. They would have to pay $200 more annually than before.

What are the Financial Impacts?

Going beyond our simple example above, we took a look at how this will change customers’ bills going forward (for those who are not grandfathered in), using the same parametric study we used in our whitepapers.

One of the graphs we used in our whitepaper is an annual bill vs energy offset chart. We modeled a few different levels of energy consumption to see how the savings stack up for different cases.

For example, a customer with 12,000 kWh annual household usage (orange) with a solar PV system that offsets 90% of their household energy usage, would have paid about $250/year in utility bills.

We show the range of typical bills for customers under the old 9.2 cent export rate in dashed lines, and the range of bills for customers under the new 5.6-5.9 cent export rate in a shaded band. Especially at the higher levels of energy offset, when customers are exporting more energy to the grid during the day, the bills under the new policy can be several hundred dollars more over the course of the year. Customers with relatively small PV systems – closer to 20% offset – rarely overproduce during the day so they are unaffected by the policy change. 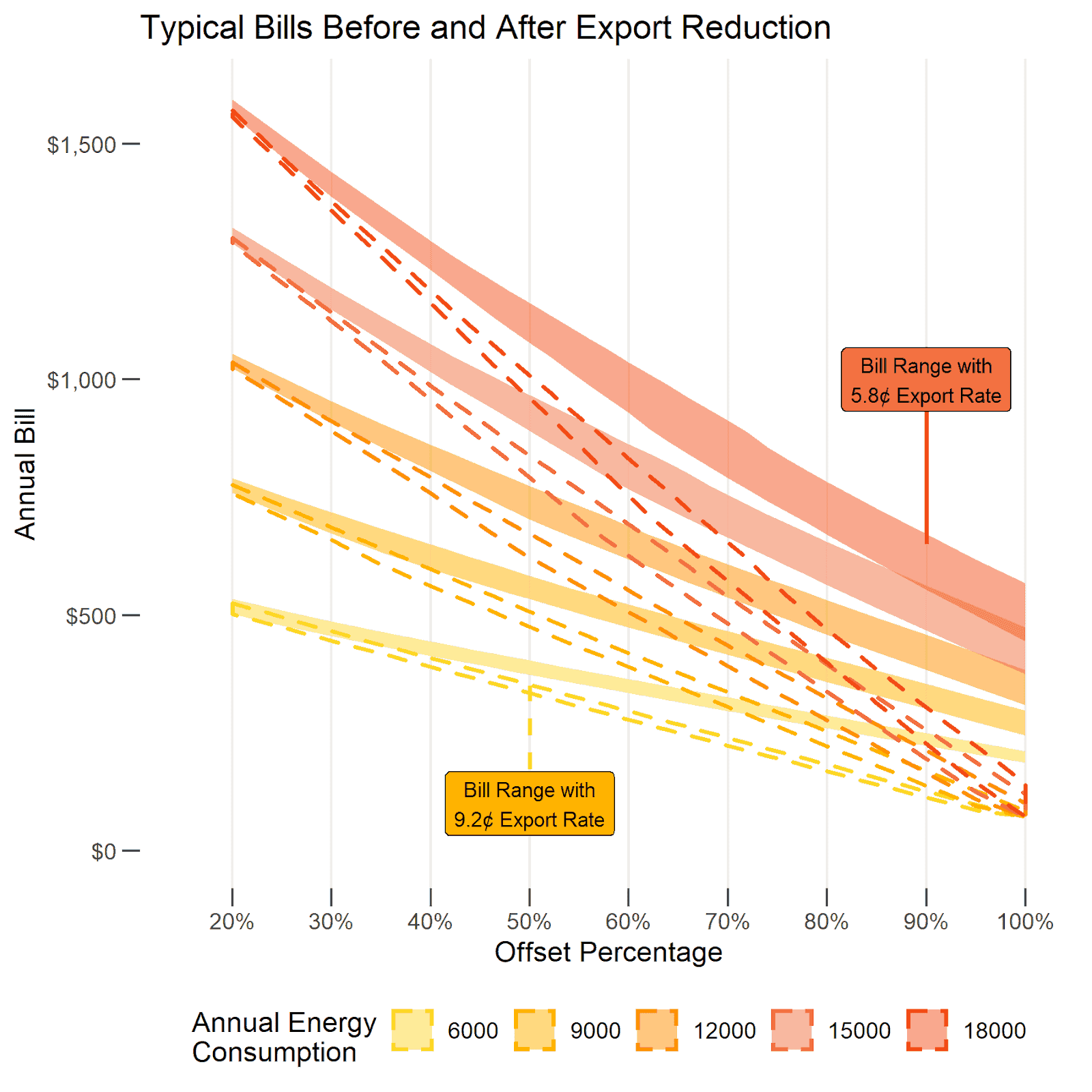 Is solar still a good investment?

One metric of a PV system’s value is the net present value (NPV) – the value of the bill savings over the lifetime of the panels, minus the upfront costs. In the chart below, we can see that the ideal system size has been reduced because of the new credit changes. Whereas in the past you’d ideally want to offset 100% of your energy use, now the best option seems to be about 60-70% of energy use. This is because that last 30-40% of energy you produce will end up going straight to the grid and you won’t get much credit for it. 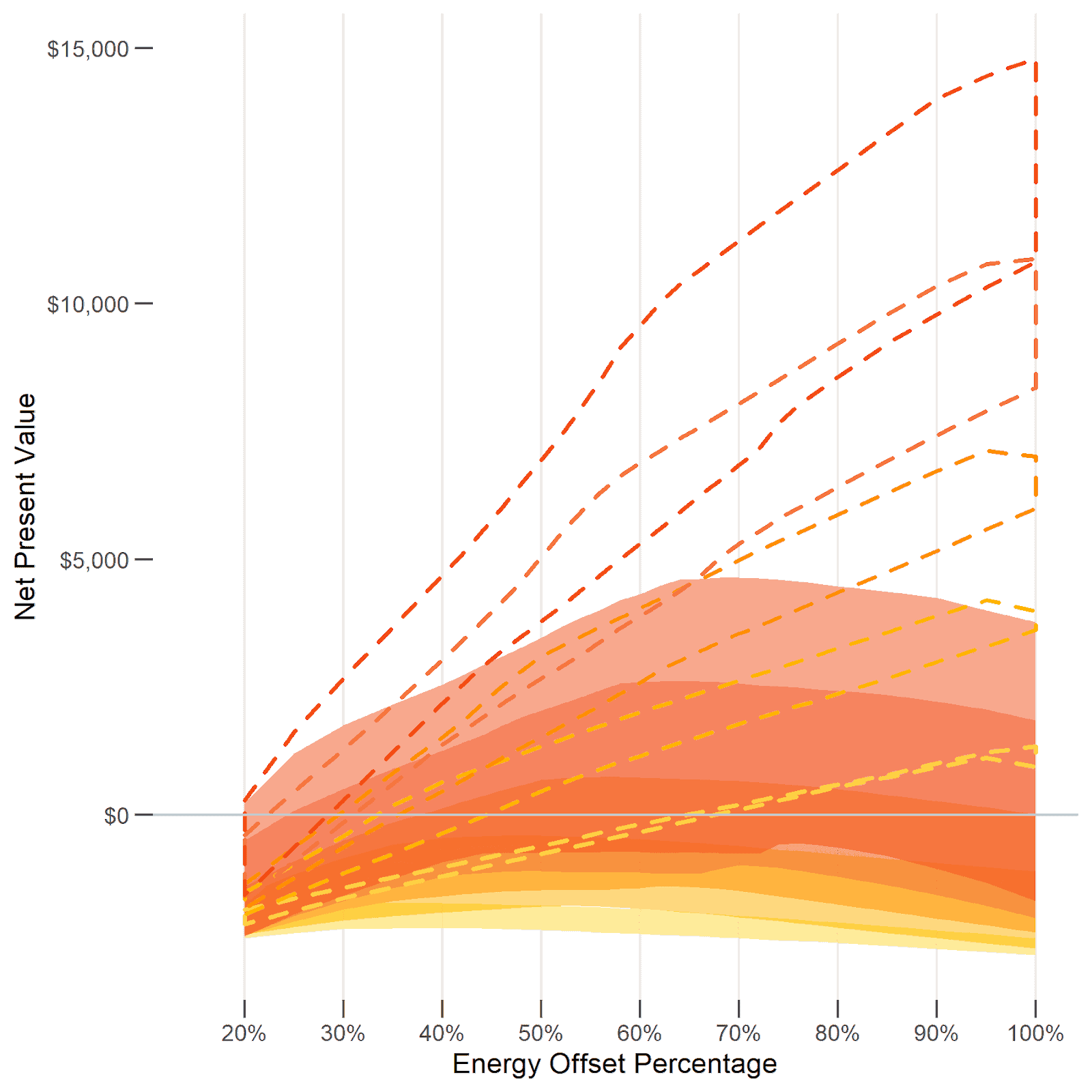 Assumptions: a customer pays cash for a $3/W system, gets the 26% ITC, and has a modest 3% utility escalation rate and 2% discount rate

Should you get a battery?

One way to get around utility modifications to NEM programs is to purchase a home battery. This allows you to store your extra solar energy and use it later, instead of putting it back into the grid. While this can make financial sense in some cases, in the Rocky Mountain Power case the price difference is only 3-5 cents per kWh, and the current battery costs may not justify purchasing a unit solely to increase self consumption (energy arbitrage). There are still many benefits to purchasing home storage though!

How to Model the Reduced Export Rate in Aurora

In the Utility Bill Savings section of Aurora, you can specify a fixed export rate of 0.058/kWh (an average between summer and winter months) to model the new export rules. Please make sure to specify an annual true up period of March for the Rocky Mountain Power territory, since this does offer credit benefits during the winter. 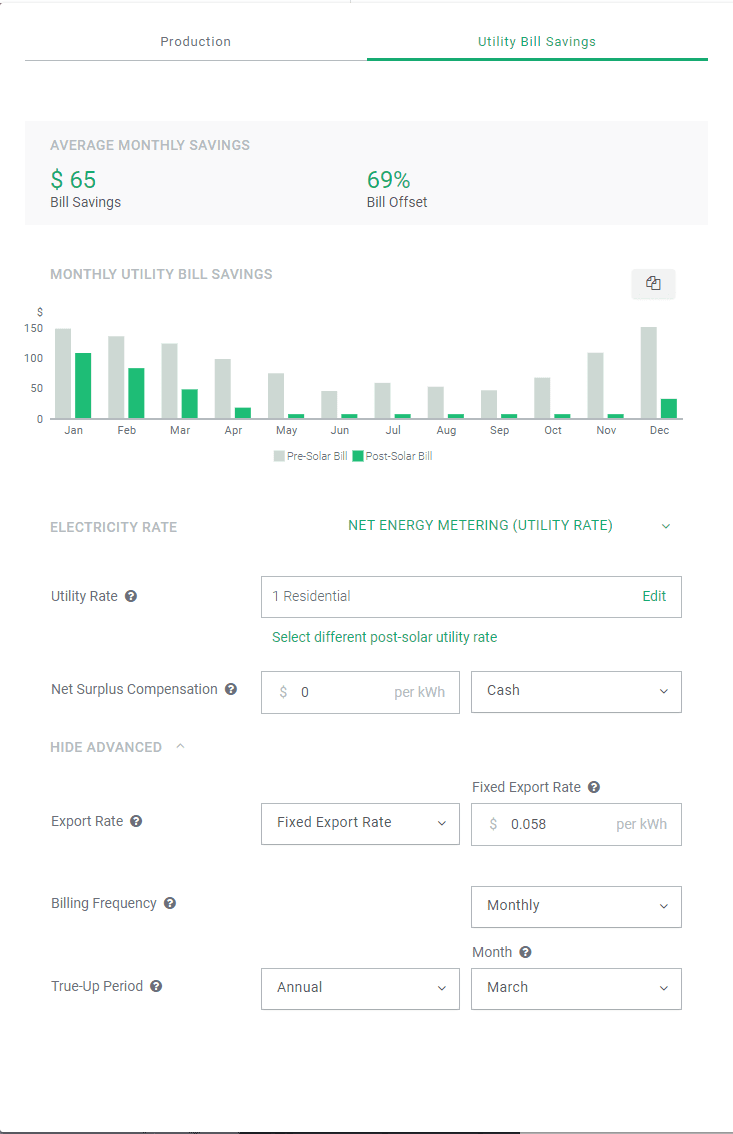