The high upfront cost of solar PV systems has remained a major barrier to the growth of the solar industry. This is due in large part to the fact that it is difficult for customers to access loans and other financing for solar installations, compared to other big purchases like a car or house. However, green banks—a new type of financing institution created by governments to increase private sector investment in clean energy—are beginning to change this. In this two-part series, we explore green bank programs around the U.S.

We spoke to officials at green banks around the country to understand the programs local solar installers should know about. In Part 1 of this series, we explored east coast green banks, which currently include banks in Connecticut, New York, and Rhode Island. In this article, we delve into the programs of green banks on the west coast and in Hawaii, and examine recent indications that the green bank model is gaining traction and may be coming to other states soon.

Speaking about the role of green banks in making solar financing more accessible, Gwen Yamamoto Lau, Executive Director of the Hawaii Green Infrastructure Authority (the green bank of Hawaii), likened them to another type of institution: “About 27 years ago, community development financial institutions (CDFIs) were formed all over the United States to finance low-income housing tax credit projects, because at that time banks considered these projects too risky. CDFIs were formed to mitigate risks for commercial lenders. Today, banks are very comfortable lending to these projects and CDFIs can help incubate other near-bankable projects. Green banks can play a similar role in helping clean energy projects get to a point where conventional lenders are comfortable supporting them.”

Like Rhode Island, California operates a green bank as division of the state’s infrastructure bank (“IBank”). The California Lending for Energy and Environmental Needs (CLEEN) Center  provides financing for municipalities, universities, schools, and hospitals (“MUSH” borrowers) as part of the state’s efforts to reduce its climate impacts.

Of relevance to solar contractors is the Statewide Energy Efficiency Program (SWEEP), which provides loans for solar projects (as well as many other projects including energy and water conservation efforts). In the last year, IBank approved nearly $4 million in direct loans under the CLEEN Center.  Among these was a $2,870,000 loan to the Monterey County Housing Authority for rooftop and carport solar installations, as well as energy efficiency and HVAC upgrades.

California solar contractors who work on commercial and industrial scale solar may want to highlight this potential funding source when talking to MUSH customers. The CLEEN Center does not maintain a registry of approved contractors for SWEEP projects; however, technical assistance is available for solar and other contractors who are interested in providing services under the SWEEP program. 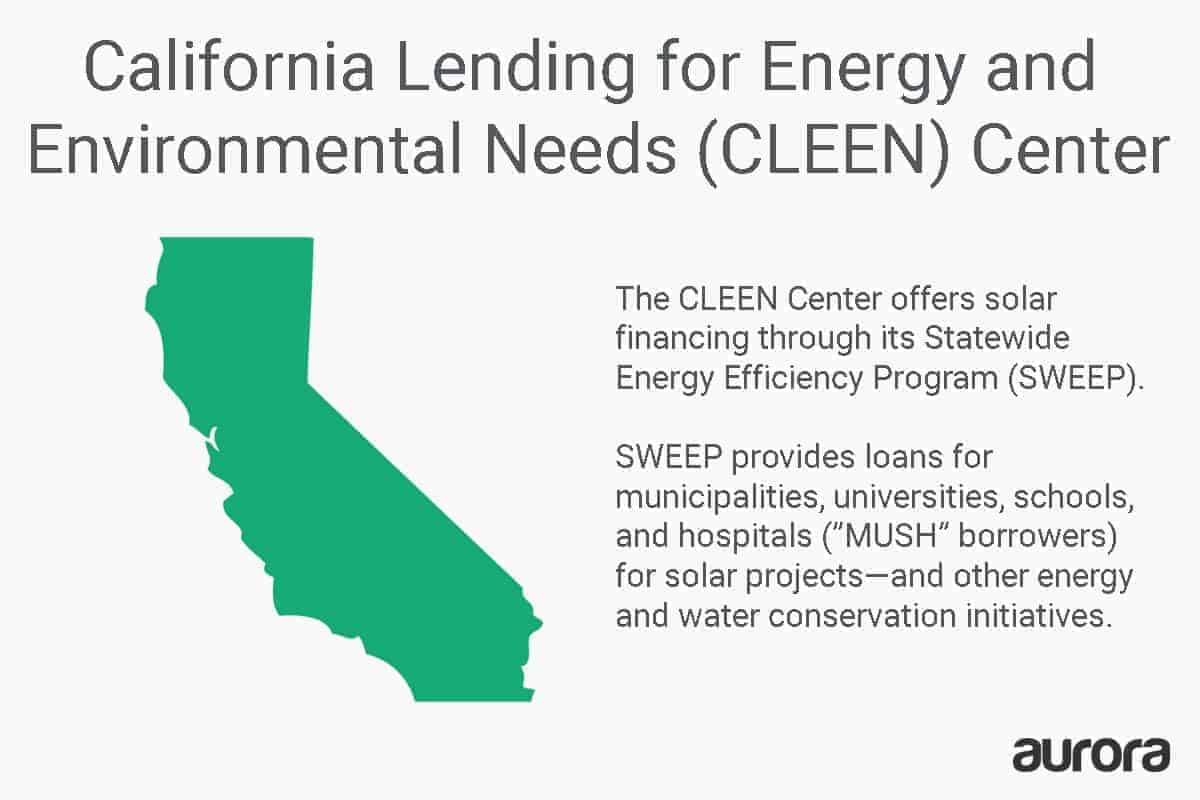 Hawaii’s green bank, the Hawaii Green Infrastructure Authority (HGIA), focuses specifically on solar PV. Hawaii has the highest electricity prices in the nation and a state commitment to reach 100% renewable energy by 2045 , so HGIA’s mandate includes supporting the growth of solar energy and making it more accessible to underserved communities who can most benefit from energy savings. HGIA pursues these goals through a solar loan program (Green Energy Market Securitization, or GEMS), which facilitated $30 million of solar projects in Hawaii over the last year.

HGIA’s Green Energy Market Securitization (GEMS) Program offers both residential solar loans  and commercial solar loans , which serve small businesses, nonprofits, and multifamily rental projects. GEMS loans have a number of unique features to make them more accessible—especially to lower-income customers. First, the bank offers up to 20-year loans at a fixed interest rate. This is much longer than loans offered by most banks, allowing for lower monthly payments. Further, the bank has no pre-payment penalty and will consider customers with credit scores as low as 600 (traditional banks typically require at least a 640).

GEMS residential solar loans are directly financed by HGIA, while GEMS commercial loans are offered in partnership with conventional banks. For these commercial loans, HGIA co-lends alongside the customer’s bank of choice and its loan is subordinate to the bank loan (i.e., it has second priority for repayment). This mitigates risk for private lenders, allowing them to offer better rates than they normally might.

Commercial solar loans may be made directly to building owners to install and own a PV system.  Alternatively, for nonprofits or other organizations that can’t take advantage of solar energy tax credits, the loan can be made to a “project sponsor.” In this case an investor purchases and owns the PV system with a GEMS loan and sells the energy to the nonprofit via a long-term power purchase agreement.

A unique feature of this solar financing structure is that HGIA offers nonprofits the option to eventually take on the loan from the project sponsor (typically after year seven, when the project sponsor has utilized tax credits and depreciation benefits). This provides non-profits a mechanism to own their own PV systems and have free solar energy after the loan is repaid. 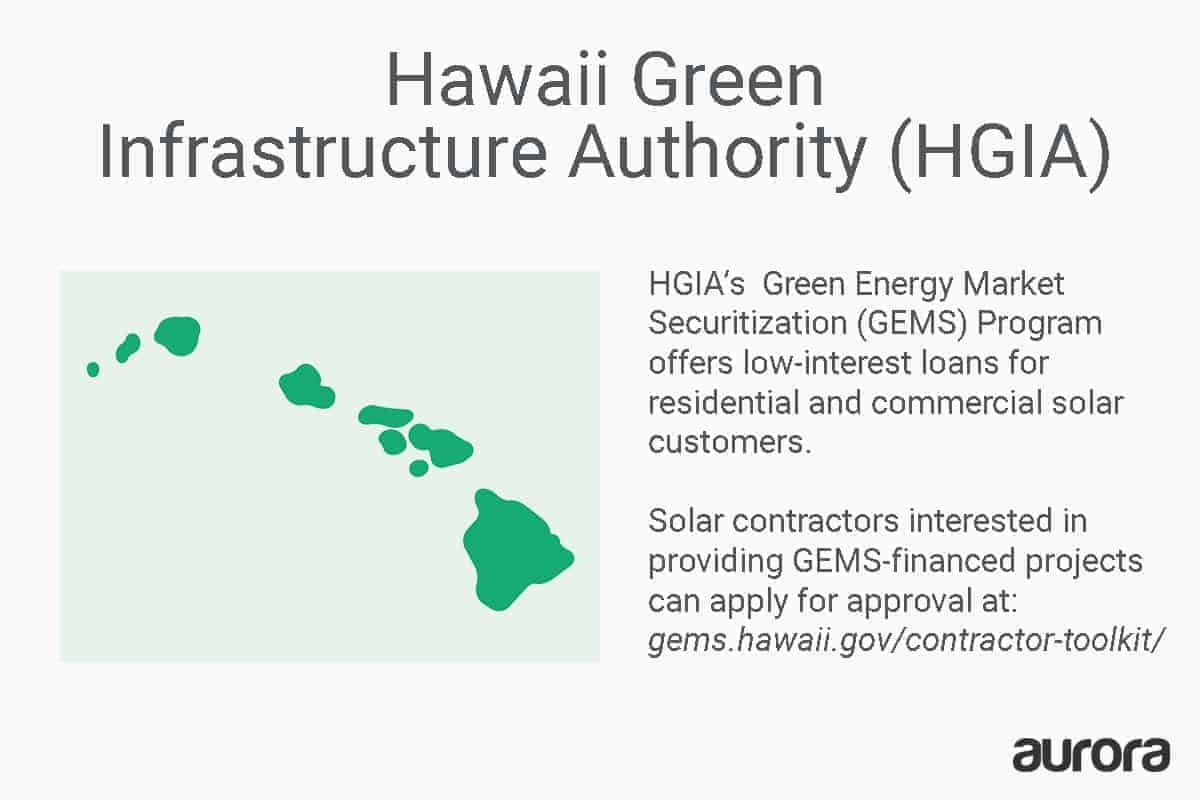 HGIA is also seeking approval to offer on-bill financing for solar, which would allow customers to repay their solar loans through their utility bills. Executive Director Gwen Yamamoto Lau explains that “Having an on-bill financing option will really allow us to benefit the underserved—especially the low-income ratepayers and the renters, who have not previously been able to participate….  we receive calls from contractors and landlords on a regular basis asking about its status, because… this program will enable contractors to serve so many more homeowners and renters that they have not been able to serve before.”

On its website, HGIA maintains a list of approved installers who can offer GEMS-financed projects. To enroll , contractors must attend a training, have appropriate licenses and insurance, and at least a “B” rating from the Better Business Bureau. There is a $100 application fee.

What Does the Future Hold for Green Banks?

Given the success of early green banks, and increasing leadership of states and cities in responding to climate change , this model is likely to play a growing role in driving clean energy market growth. Already a number of other states are exploring the creation of a green bank including Delaware, Virginia, Colorado, Missouri, Massachusetts, Washington DC, and, most recently, New Jersey .

Additionally, existing green banks are working to expand the model by sharing their insights. In 2017, the Connecticut Green Bank was awarded the Innovations in American Government Award by Harvard University. With the $100,000 prize and a matching amount of its own funds, the Bank has committed to creating a Green Bank Academy, to support other jurisdictions in replicating the green bank model.

“NY Green Bank will also work with other States and philanthropic entities to help establish local green banks in other states. In support of these new green banks, NY Green Bank may provide financing along with mid- and back-office services, due diligence, underwriting and general technical support,” says COO Caroline Angoorly.

In other exciting news, New York Governor Andrew Cuomo recently announced that NY Green Bank will explore options to raise at least an additional $1.0 billion in private sector funds, allowing it to consider investable projects that extend beyond the boundaries of New York state!

As a solar contractor, if there’s a green bank in your area it can present valuable opportunities to connect with new customers. If your state doesn’t have a green bank, keep an eye out for the expansion of green bank activities in your area. Or—if you’re interested in taking a more active role in advocating for the creation of a local green bank—organizations like the Coalition for Green Capital  and the Green Bank Network  offer resources and expertise.