If you’re a regular reader of the Aurora Blog, you know we love to flex our solar design skills through periodic “Solar Landmarks”—where we design solar installations for notable landmarks around the world. Today on Independence Day, we could think of no better landmark to model than Independence Hall, the birthplace of American democracy.

Both the Declaration of Independence and the U.S. Constitution were crafted and signed in these hallowed halls, now a UNESCO World Heritage Site. Andrew Hamilton oversaw construction of the building, which began in 1732, and George Washington was appointed Commander in Chief of the Continental Army here in 1755.

While we suspect that the National Parks Service might have some reservations about adding solar panels to such a historic roof, in today’s article we engaged in a fun thought experiment to see how solar could deliver energy savings and environmental value to this national treasure.

The building is comprised of three main parts—a central hall, which sports a tall tower and steeple (these were added in 1750, and were not part of the original building), and two wings on the east and west sides. The wings are connected to the main portion of the building by covered walkways.

The east and west wings have hipped roofs, while the roof of the central section has folds and is relatively flat in the center. This center section section of the roof has a few obstructions we need to be mindful of when considering a rooftop solar installation: low fences section off this part of the roof, which is also bounded on either end by decorative brick walls. 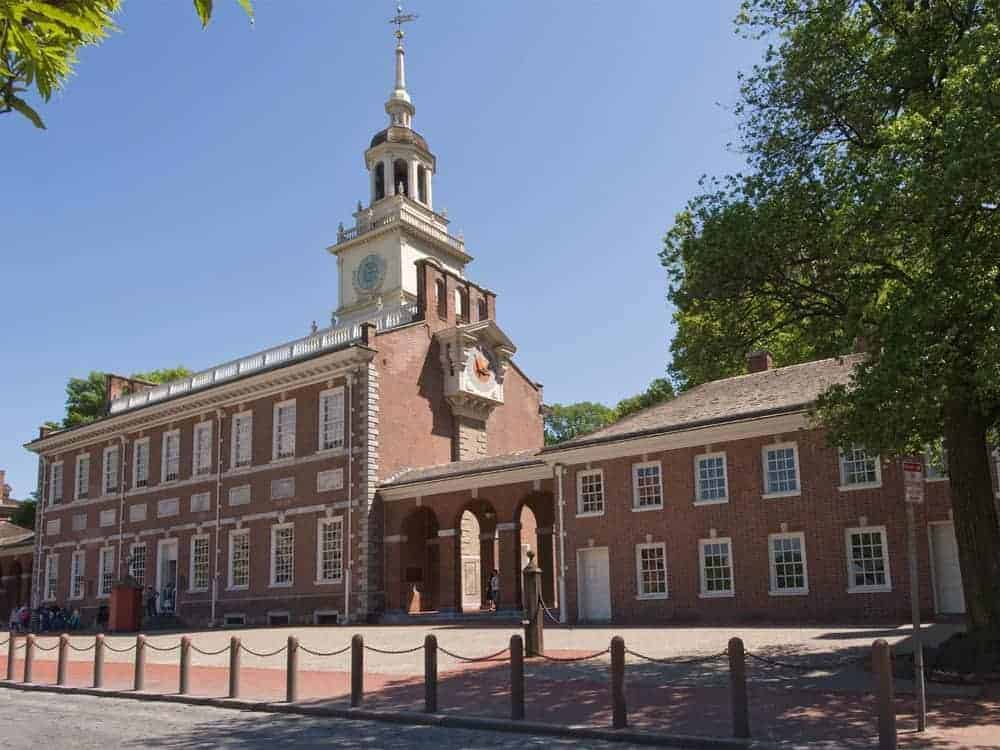 In this view of Independence Hall, the obstructions on the roof of the central building (decorative fences and brick walls) are clearly visible. Credit: NPS photo.

Immediately to the right and left of Independence Hall are two other notable buildings from the colonial era, Congress Hall, which housed the U.S. Congress from 1790 to 1800, and Old City Hall which housed the United States Supreme Court in the 1790s. These two structures are also part of Independence National Historical Park operated by the National Parks Service, through an agreement with the City.

While we lacked the utility bill data we might have if this were a real solar client, thankfully, Philadelphia publishes energy consumption data for city-owned buildings—including Independence Hall! 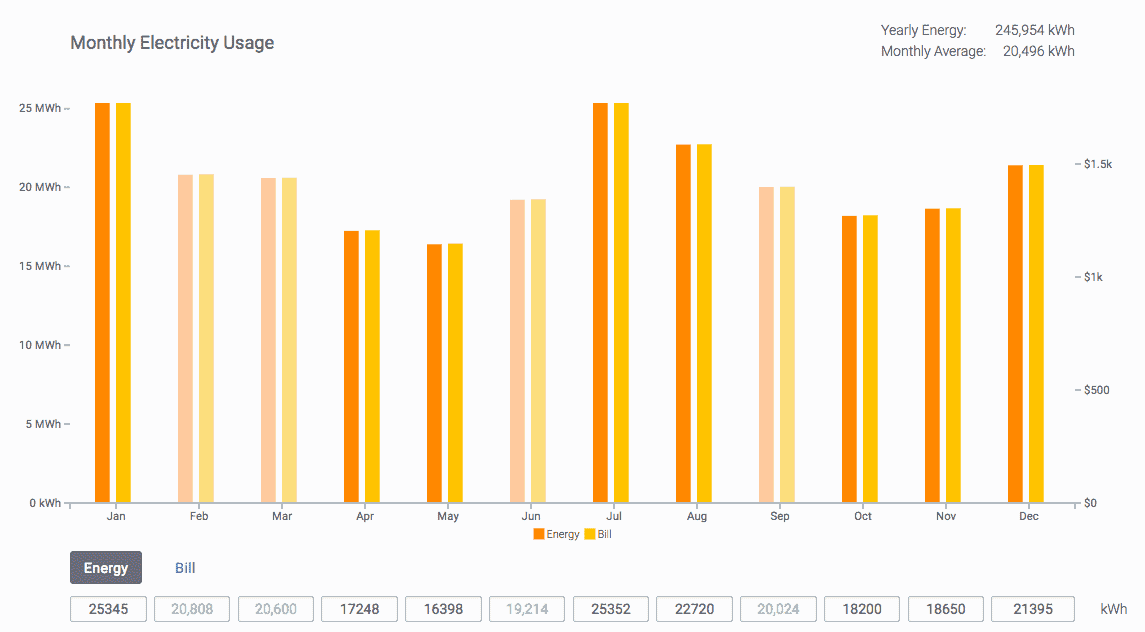 Estimated electricity consumption of Independence Hall by month based on it’s known annual electricity usage. Aurora’s consumption portal is able to extrapolate usage for other months given one or more monthly usage (or bill) values.

[For more information on how Aurora intelligently extrapolates energy consumption based on patterns for different areas and building types, check out our related residential and commercial load profile articles.]

To ensure precision in determining how many solar panels this roof could fit, and how energy production would be impacted by shading from trees and other obstructions at the site, we started by creating a detailed 3D model. For good measure, we also modeled Congress Hall and Old City Hall in case they shaded the structure. Aurora’s SmartRoof design functionality made this easier since we could just outline the edges of the roof and Aurora would automatically infer the roof structure. 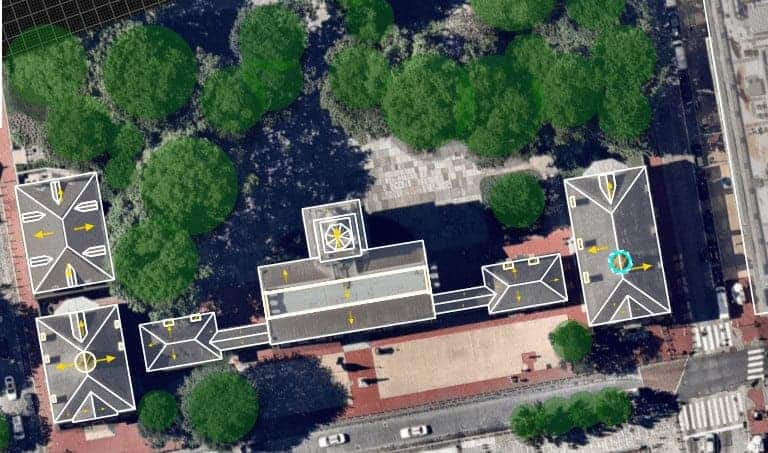 A 2D view of our site model of Independence Hall, designed in Aurora.

With a few manual adjustments and the addition of roof obstructions, we had a detailed 3D model from which to create an accurate solar design. Obstructions included two tall chimneys on the east and west wings of Independence Hall, the previously mentioned fences on the roof of the main building, and spires on the roofs of Congress Hall and Old City Hall. The area is also filled with many trees and a neighboring skyscraper that could cast shade on the roof, so we carefully modeled these structures as well. 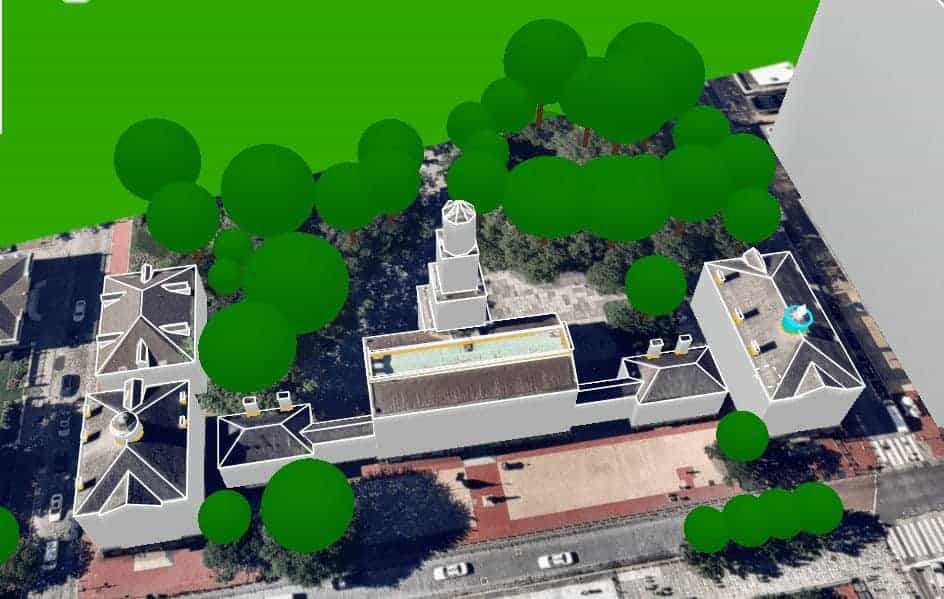 A 3D view of our site model of Independence Hall, designed in Aurora.

At first glance, it seems that there is plenty of roof space to support a moderately large commercial solar installation. However, we also needed to evaluate the solar potential of this roof because we would not want to place panels in heavily shaded areas.

Using Aurora’s remote shading engine we generated an irradiance map of the roof of Independence Hall. Brighter areas represent areas of higher irradiance. Unfortunately, the solar potential of Independence Hall, located in an area with many trees, leaves a lot to be desired. The south-facing roofs, though having higher solar access as expected, have either obstructions (chimneys on the east and west wings) or, in the case of the main building, receive shade from the steeple. 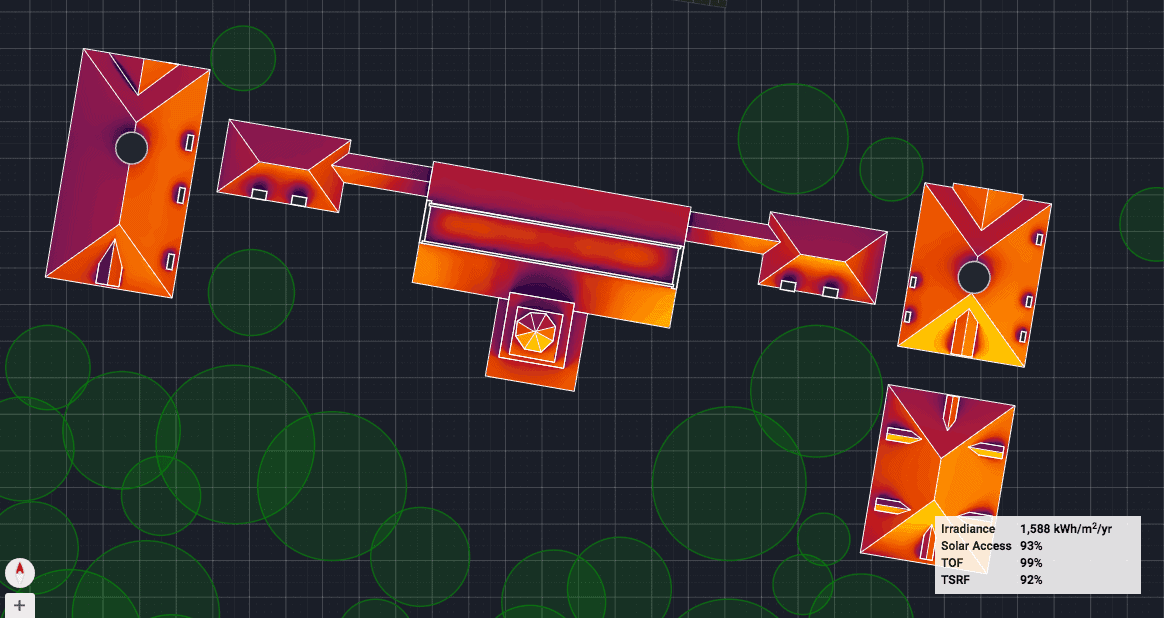 An irradiance map of Independence Hall, showing how much solar energy is available at different points on the roof.

The roofs of Congress Hall and Old City Hall were more promising, with over 90% solar access on some portions of the south-facing roofs (see dialog box above). We initially entertained the idea of placing some panels in these areas, although the roof faces are small and feature dormers.

Using Aurora’s “fill roof face” tool, which allowed us to specify a minimum Solar Access Percentage (SAP) for placement of panels, we explored whether a rooftop system could be a viable option. However, requiring that panels be placed only in areas with a SAP of at least 80% resulted in a smattering of panels that was not aesthetically pleasing:

In our first design we attempted to place panels in areas of the roof with a Solar Access Percentage greater than 80%. However, the limited roof area meeting that criteria made this design strategy undesirable.

With a rooftop solar system effectively ruled out, we turned out sights to a possible ground mount for Independence Hall. We think that option would also be more appealing to the National Parks Service, tasked with maintaining the site’s historical integrity! Plus, on hot summer days, these elevated ground mounts could provide much-appreciated shade for visitors.

Across Chestnut Street is a sidewalk area and a large grassy expanse, both also part of Independence National Historic Park. With little tree cover in this area to obstruct solar access, we thought this was a great place for a solar ground mount. 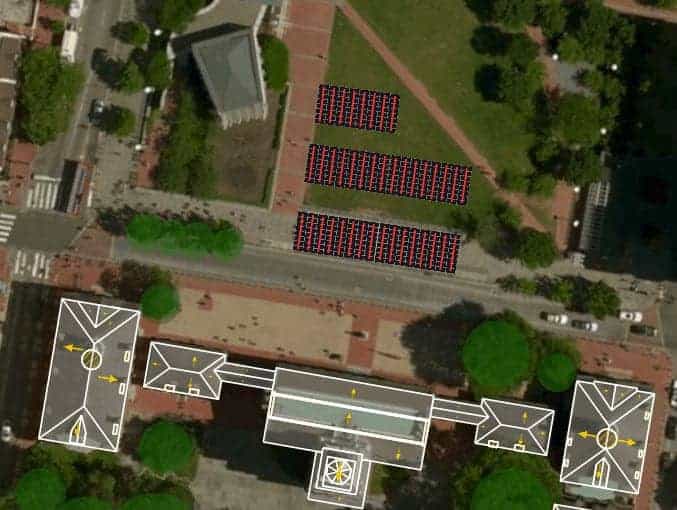 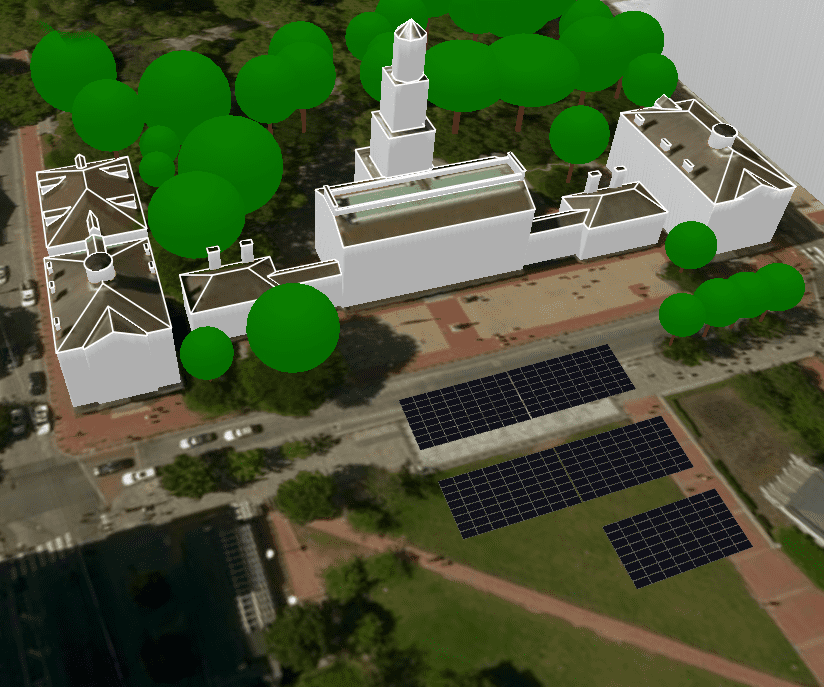 We designed a system comprised of 5 arrays of 64 panels (8 rows of 8) with a tilt of 15 degrees.1 The result is a 109 kW system. We then used Aurora’s performance simulation engine to calculate how much energy this system would produce for Independence Hall. Aurora calculates that the system would produce 127,406 kWh per year, offsetting 52% of the building’s annual energy use. Not too shabby! 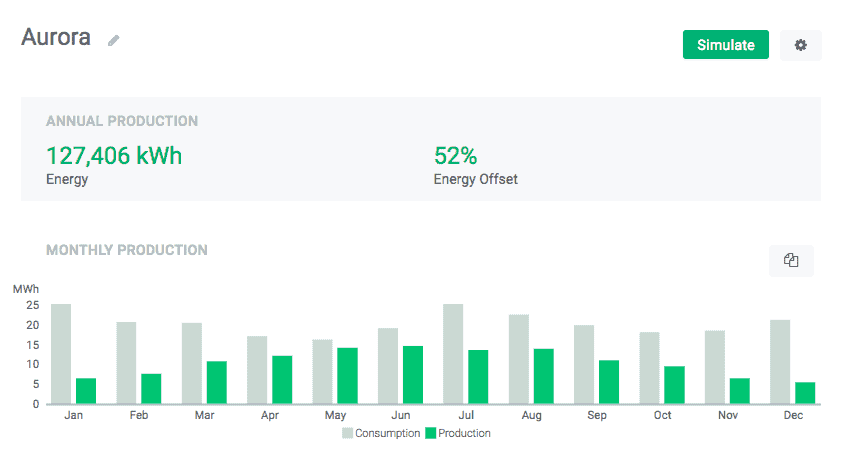 Aurora’s system loss diagrams show how different factors reduce the energy production of your solar design. This can be helpful in allowing you to improve the performance of your design.

Independence Hall was the site of many of the great advances in modern democracy. With a solar installation like this, it could also help lead the way toward energy independence and a future of clean energy! 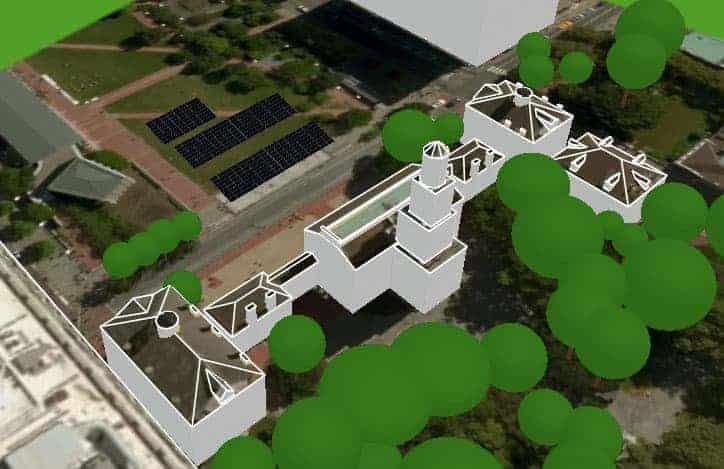 P.S. Have another famous landmark you’d like to see solar on? Let us know in the comments below and we’ll see what we can do!

1. We initially designed the system with a tilt of 9 degrees but using Aurora’s system loss diagram we determined that we were losing a lot of production due to the Tilt and Orientation Factor so we adjusted the solar design accordingly. This ability to see how different design factors impact performance and quickly make adjustments was very helpful, allowing us to generate an additional 22,147 kWh annually! ↩

Special thanks to Aurora Research Engineer Andrew Gong for creating the site model of this complex building!