In December 2017, the value of the digital currency bitcoin hit an all-time high, with a single bitcoin valued at over $17,000. If you had bought $100 of bitcoin in 2010, your investment would have been worth over $28 million at that time, according to Fortune.

That might have you kicking yourself for not paying attention to bitcoin sooner. But if you’re like many of us, bitcoin—and blockchain, the mechanism behind it—remains something of a mystery. In today’s article, we offer a brief introduction to what blockchain is and why this technology matters for solar.

The uses of blockchain go far beyond creating currencies like bitcoin—and have important implications for the energy sector, including the solar industry. First, a huge amount of energy is consumed in the creation (“mining”) of bitcoin and that energy consumption is expected to continue to grow, potentially undoing the climate benefits of clean energy development. On the bright side, however, solar could provide a cost-effective power source for bitcoin mining, presenting business opportunities to solar developers.

Additionally, there are a wide number of potential applications of blockchain technologies that could help advance solar energy—such as enabling peer-to-peer energy sharing, connecting solar projects with interested investors, or providing a mechanism for compensating solar energy producers.

What is blockchain? How does it relate to bitcoin?

[Already a blockchain expert? Jump ahead to see how it’s impacting the solar industry.]

A blockchain is an encrypted digital ledger of transactions which is maintained by a distributed network of users’ computers, rather than a central authority. The name blockchain comes from the fact that bundles of transactions in the ledger are called “blocks.” As they are added to “chains” of existing blocks, transactions in any preceding block cannot be altered or deleted.

A key innovation of blockchains is that although the ledger is public, it is designed so that the record cannot be altered, enabling transactions between parties that would not otherwise trust each other. As Morgan Peck explains in Spectrum, the journal of the Institute of Electrical and Electronics Engineers (IEEE), this approach “reliably incentivizes a network of potentially dishonest participants to process transactions and secure a single version of those events.” (For a detailed overview of blockchain, Peck’s article is an excellent starting point. )

The first and most-well known application of blockchain is bitcoin, a digital currency created in 2008 following the Great Recession. It was touted as a currency option that could replace the role of financial institutions, in tracking and reconciling financial transactions, with code and a network of computers around the world. Since then many other blockchain-based cryptocurrencies  have emerged, such as Ethereum, Ripple, and LiteCoin. A blockchain contains bundles of transactions called “blocks.” Once added to the chain, the transaction ledger in a block cannot be changed, creating a consistent version of events for all users in the network.

How does a blockchain work?

Different types of blockchains use different mechanisms to “lock” the blocks in the chain and prevent altering of the data. Bitcoin operates with a “Proof of Work” approach, in which adding a block to the chain involves solving complex math problems with powerful computers in order to find the “hash” or code that will “lock” the next block in the chain. “Miners,” who put in the computational work to find these hashes, are incentivized to do so because whoever finds the correct hash is paid in bitcoin for that service.

Finding the right hash requires significant computing power (and thus electricity). As Peck explains, “Any changes in old blocks will result in invalid hashes for all subsequent blocks.” Likening hashes to keys that open locks, she notes “it’s as though the design for the lock at the end of the chain depends on all the locks that came before it.”

This makes attempts to alter prior blocks in the chain almost impossible, because that would require redoing all of the computational work for that block and all subsequent blocks. Additionally, while a would-be attacker attempted to do that with their limited resources, other players in the network would constantly be “mining” new subsequent blocks. Therefore, as long as an attacker does not control more than 50% of the whole system’s computation power, they will never catch up with the rest of the players.

Finally, the system is structured so that the computation involved in finding the right hash gets harder over time. This keeps the rate at which blocks can be added consistent in spite of increases in computing power.

Why does blockchain matter for solar?

Many of us entered the solar industry to make a positive difference in the world—including helping to tackle climate change. But energy consumption for bitcoin mining could negate climate gains made with clean energy. As bitcoin becomes more and more popular the amount of energy being consumed to create it is reaching astonishing levels.

While bitcoin mining operations are distributed around the world and no single authority tracks exactly how much energy is consumed for these activities, researchers have estimated the scale of the energy impact. Writing in Spectrum, Peter Fairley cites Dutch researcher Sebastiaan Deetman of Leiden University who estimates the current energy draw of bitcoin at 700 MW per year  and concludes that by 2020 it could reach 4 gigawatts—as much energy as the country of Denmark.

A December 2017 Grist article offered a much more distressing assessment , estimating that, at its current growth rate, the bitcoin network will use more electricity than the United States by 2019. The author asserts that this phenomenon is essentially undoing the gains made in tackling climate change through the growth of clean energy.

Bitcoin mining operations have already caused local grid disturbances in some areas. In Venezuela, where bitcoin is seen by many as a more viable currency than the Venezuelan bolívar (now almost worthless due to inflation), there are reports of bitcoin mining causing instability on the electricity grid . 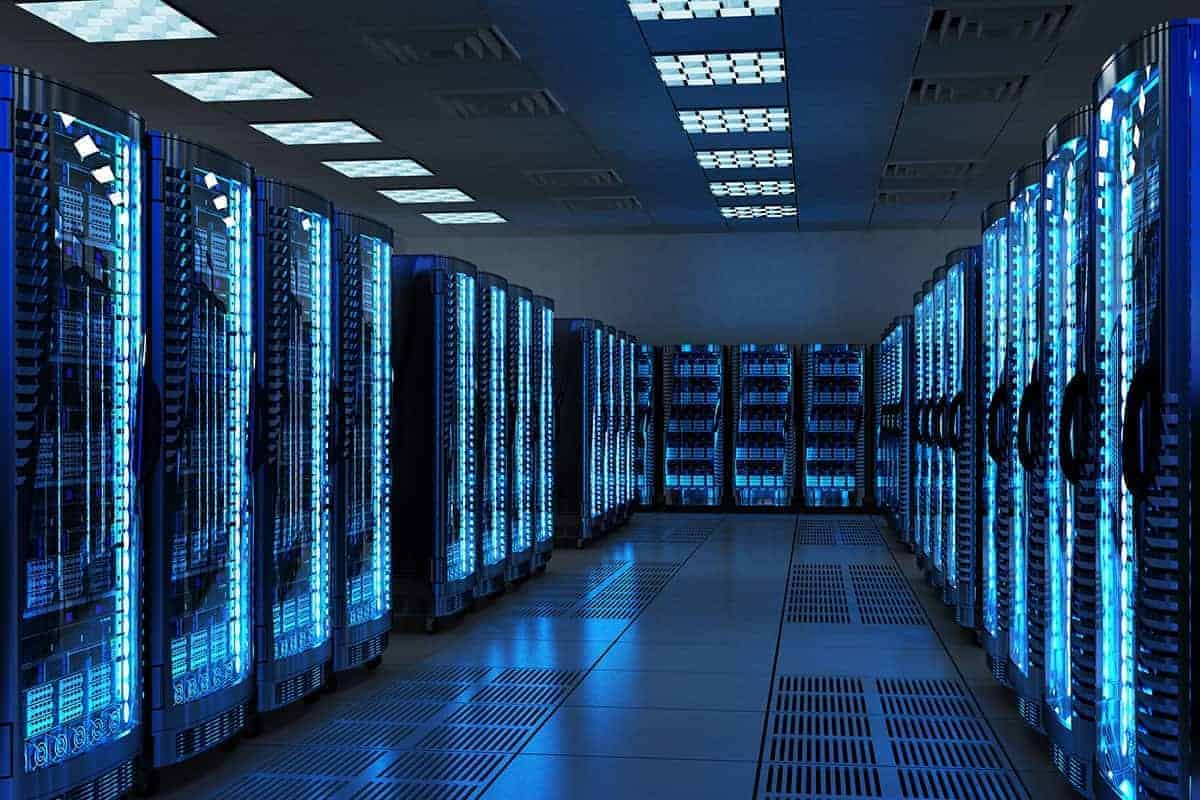 Despite these troubling energy and environmental implications, the bitcoin network’s need for cheap power raises the question, what are the opportunities for powering bitcoin mining with solar energy?

At least one company is already getting into this space. A company called Envion has a business model that involves the use of mobile bitcoin mining servers (housed in shipping containers) that run on excess energy from solar farms  when there is overcapacity in a local area. This makes use of energy that would otherwise go to waste without energy storage, while providing a cheap—and carbon-free—source of power.

Writing for Greentech Media, Tam Hunt highlights the financial opportunities of a number of different approaches for powering bitcoin mining with solar energy . These include the use of off-grid solar farms, or using bitcoin mining as a way to monetize solar production without a power sales contract, which can sometimes be difficult to obtain.

One promising use of blockchain is to verify and compensate the production of solar energy. Writing in MIT Technology Review, Mike Orcutt discusses how these kinds of applications could transform the modern electricity grid , eliminating layers of government and utility intermediaries involved in compensating producers of solar and other renewable energy. This could include using blockchain to track the production and sale of renewable energy credits—like SRECs.

A related application already developed is SolarCoin , a blockchain-based cryptocurrency created to incentivize greater investment in solar energy. Whereas bitcoin is created by expending energy for computation, the creation of SolarCoin is tied to solar energy production. Owners of solar systems can register them with the SolarCoin Foundation and receive one SolarCoin for each megawatt hour their system generates.

Although creation of SolarCoins is tied to actual production of solar energy , anyone can purchase existing SolarCoins. Those who want to monetize their SolarCoin  can convert it to bitcoin and from there into the currency of their choice.

Unlike many solar incentives, like the Investment Tax Credit or SRECs, One interesting characteristic of SolarCoin is that it doesn’t just benefit the system owner. In the case of leased residential systems, the homeowner is the one eligible to receive SolarCoin rather than the company that owns the system. The SolarCoin Foundation explains  that they structured the system this way because they believe it more effectively achieves the project’s goal of driving greater solar investment.

Solar installers can also benefit. “For an installer, SolarCoin represents an alternative free revenue for promoting solar power and the use of renewable energies. Installers who refer claimants to the SolarCoin program are entitled to a 10% bounty of the annual claim amount for each facility to be paid out in SolarCoin.”

And, as John Cromer of Community.Solar explains , another benefit of SolarCoin is that it provides documentation of the amount of solar energy being produced by small systems, data which is currently poorly tracked. Community.Solar  provides solar continuing education courses; they use the SolarCoin blockchain to track course participation, and even offer free SolarCoin registration of solar arrays.

Australian startup Power Ledger  is already using a blockchain platform for this purpose. They note that their service allows solar producers to be paid immediately for the energy they produce, in contrast to a typical utility payment cycle of 60 to 80 days.

This approach could provide an alternative to net metering. It could also offer a solution to the same challenge that community solar and virtual net metering seek to solve—allowing households and businesses that can’t go solar themselves to partake in energy from off-site solar projects.

Another example you may have read about is a company called LO3 Energy  that is using blockchain to manage the purchase and sale of energy among participants in a solar-powered community microgrid in Brooklyn. Blockchain can facilitate peer-to-peer energy trading. This could enable solar energy producers to provide energy to consumers in their local community.

Blockchain could also be used to make investment in solar projects more accessible, helping to increase solar capacity. Writing in Forbes, Roger Aitken notes that “Sun Exchange, a peer-to-peer solar equipment leasing marketplace based in South Africa, has raised $1.6 million (m) in seed financing… to ‘accelerate global access’ to solar power.” Sun Exchange’s  mission is “to enable anyone to go solar and transition the planet into a clean energy economy of abundance.”

The company essentially offers a solar crowdfunding platform using blockchain. Investors around the world can buy individual solar cells in arrays for schools, hospitals, wildlife refuges, and other customers in developing nations. They operate in areas that lack consistent access to electricity, but where solar energy is an abundant resource. The systems are leased to customers and investors earn income—in bitcoin or South African Rand—through energy payments once the project is deployed.

While many of these applications are in their early stages, it is clear that the potential uses of blockchain for advancing solar and other forms of clean energy, and even transforming how we manage the electricity grid, are significant.

In fact, a team at the Rocky Mountain Institute (whose work on community solar we highlighted in a previous blog post) recently joined forces with an Austrian blockchain startup to create a non-profit called the Energy Web Foundation . The Foundation has created its own blockchain specifically for the energy sector, which they will use to test promising applications for the industry.

Whether you’re a bitcoin enthusiast or cynic, other blockchain applications may one day transform the solar industry so you might want to keep an eye on these emerging developments!

DISCLAIMER: This article has been published for informational purposes only. Aurora Solar does not provide investment, financial or legal advice, and this article is not a recommendation of any cryptocurrency.